Description of Orange Parade in Lindsay, 1976, to accompany set of 35 mm colour slides.

This Orange parade was the last of the great Orange Order parades held in Lindsay. The organization still holds parades yearly in various locations in Ontario, but there has never been one to surpass this one in 1976. I was there.

It was a beautiful Saturday, warm but breezy. The parade participants formed up in the greeen space between Lindsay Collegiate and Central Public School. This was a very large park area, and the collegiate had not yet built its expansion. The area was filled with hundreds of people dressed in white shirts, women in white dresses, and little kids running around in white with orange sashes or hair ribbons. Lodge banners were everywhere.

There were probably over forty lodges represented with a contingent of marchers, or a fife & drum band. The bandsmen practising were booming the drums and tootling their fifes with gusto, and could probably be heard a mile away from the park.

I was on hand with my camera, but remember there were no digital cameras with unlimited capacity. I had only one roll of 36 exposure and two rolls of 20 exposure Kodachrome slide film. This means you have to choose your subjects carefully and frugally.
The parade began at the top of Kent Street in front of the collegiate, then extended down to Kent to the intersection with Lindsay street in front of the old Kent theatre. Then north on Lindsay street over the locks bridge, then west on Wellington street over that bridge and back home to Victoria Park where the groups disbanded.

At the parade's height, Kent street was filled with marchers and viewers the complete length of the street. I would estimate there were at least fifteen thousand people out that day. They even had a steam locomotive train chartered to bring several hundred people from Toronto, using the old CNR tracks (long gone).

There were at least thirty different bands, mostly fife and drum, but some big professional bands from Peterborough and Toronto. The lodge bands all played well, and as a former band member in the Lindsay Collegiate Cadet band, I know when bands sound good.

The parade took about two hours to pass by, having started at noon. The end of the parade was marked by speeches delivered from the outdoor bandstand in Victoria Park (long gone). The speeches were heavy on defence of the British Monarchy, the democratic parliamentary system, defence of Protestantism, and harsh words for the Pope and his corrupt Catholic Church (many cheers here).

By this time it's near 4:30 p.m. and everyone at the park is well lubricated and fed. It's time for the charter train to leave for Toronto, which its passengers reluctantly boarded. We heard later that there were so many drunks on the train it had to be stopped at Blackwater station, and the provincial police were called in to remove the drunks and restore order.

There has never been a parade like that again. I am glad I attended, and I hope the small collection of colour slides can be digitized and preserved for a glimpse into this part of Ontario's history.
Notes
Note: donor says the parade happened in 1976, but the date stamped on the slides says 1975.
Date of Publication
Jul 1975
Subject(s)
Parades & processions
Orange Order
Loyal Orange Lodge
Personal Name(s)
Burke, Glen
Geographic Coverage
Copyright Statement
Copyright status unknown. Responsibility for determining the copyright status and any use rests exclusively with the user.
Contact
Kawartha Lakes Public Library
Email:lindsaylibrary@kawarthalakeslibrary.ca
Website:
http://www.kawarthalakeslibrary.ca
Agency street/mail address:
190 Kent St W.
Lindsay, ON K9V 2Y6
(705) 324-9411 extension 1268 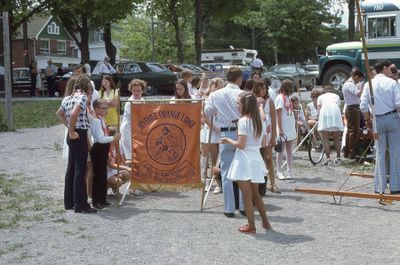