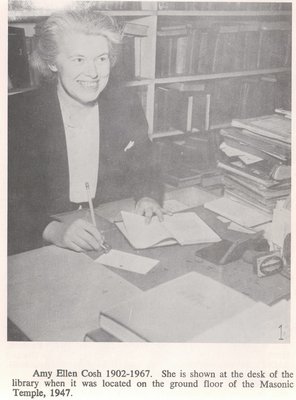 Amy attended Rokeby school in Bobcaygeon and went on to win the county scholarship to attend Lindsay Collegiate Institute until grade 12. She worked for a time in the office of G.W. Taylor, then continued her education at the Peterborough Normal school where she obtained a 2nd class certificate. After teaching public school for several years, she entered the University of Toronto in 1923. She completed the honours course in English and History in 1927.

Amy’s mother’s illness and death, her father’s poor health and age, and her own bout with typhoid fever, ended a 3 year career as a high school teacher. She took up residence in the family home.

Amy took on her mother’s secretary-treasurer work for the library when her mother, Jane, was too ill to continue. After Jane’s death, she became the secretary-treasurer. Shortly thereafter, the librarian resigned and Amy took on that position. With her exceptional knowledge of books and perceptive people skills, this temporary position lasted until 1967, some 34 years.

Amy was dedicated to the history of Bobcaygeon and the surrounding area. She created a scrapbook during WWII full of photos that she requested of all the Bobcaygeon servicemen and women, as well as newspaper clippings of local interest. For Bobcaygeon’s centennial celebrations, she suggested having a display of antiques in the library. Local residents responded enthusiastically with donations and the back room display for the centennial became a permanent museum/feature of the library?. Amy thus became its founder and curator.