We Are All Treaty People: Indigenous History in Kawartha Lakes
Main Menu → Previous Panel → Next Panel
The Indian Act, 1876
Panels
What is a Treaty?Treaties of the Kawartha LakesTreaty 20: Rice Lake Land SurrenderIndigenous Peoples in the Kawartha Lakes Treaty RegionsManita: An Indian LegendManoomin: The Good SeedThe Indian Act, 1876Residential "Schools" or Industrial "Schools"Truth and Reconciliation
In Canada, efforts to assimilate Indigenous peoples centre within the 1876 Indian Act. Nearly ten years after confederation, in 1876, the Act was a very specific piece of legislation established that defined what it meant to be ‘Indian’ by Canadian standards. It determined land ownership and the establishment of reserves in Canada to house Indigenous peoples until they were assimilated into ‘civilized’ society, or eliminated. The establishment of the Act also coincided with the geological survey and mining of ore.

Sections of the Act made it easy for women and children to loose their Indian status. In addition, a Western electoral system was imposed on most bands, discarding traditional governance systems and excluding women from participating. The overall purpose of the Indian Act was to control, segregate, and assimilate Indigenous peoples into Euro-Canadian society. Since it’s original enactment the Indian Act has had many amendments and changes but still holds today. It is important to remember the original purpose and intent of this Act, and why it was created.

Why we don't get rid of the Indian Act
In 1969, Prime Minister Pierre Trudeau and his Minister of Indian Affairs, Jean Chrétien, unveiled a policy paper or white paper that proposed ending the special legal relationship between Indigenous peoples and the Canadian state and dismantling the Indian Act and this was met with forceful opposition from Indigenous leaders across the country.

The federal government’s intention, as described in the white paper, was to achieve equality among all Canadians by eliminating "Indian" as a distinct legal status and by regarding Indigenous peoples simply as citizens with the same rights, opportunities and responsibilities as other Canadians.

In a response to the white paper, Harold Cardinal explained:

"We do not want the Indian Act retained because it is a good piece of legislation. It isn’t. It is discriminatory from start to finish. But it is a lever in our hands and an embarrassment to the government, as it should be. No just society and no society with even pretensions to being just can long tolerate such a piece of legislation, but we would rather continue to live in bondage under the inequitable Indian Act than surrender our sacred rights. Any time the government wants to honour its obligations to us we are more than happy to help devise new Indian legislation.”

Information provided by The Land Between. 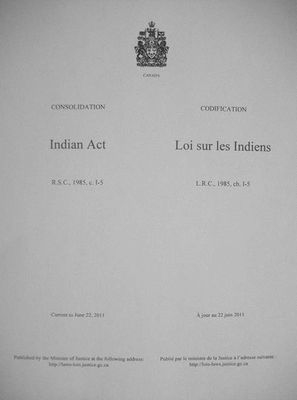