Full Text
March 25, 1942
DR. CROWE, COMMANDO WHEN CAPTURED AT CRETE
Letter From Popular Minden Doctor Received by L.M. Frost, M.P.P.—Recent Letter Returned Undelivered
Orangeville, March 28.—Captain Wilfred Crowe, mentioned as a prisoner of war by the Department of National War Services last Friday in a statement asking for particulars regarding his next of kin, is a former Organgeville boy, Wilfred Raymond Crowe, whose mother still resides here.
He was born in Orangeville forty-eight years ago next month and graduated in medicine from Queen’s University, Kingston, in 1923. Later that year he married an Orangeville girl, Ruth Shaw, a graduate nurse, and he started practicing in Minden, Ont. Shortly after the outbreak of war, Dr. and Mrs. Crowe went to England and he was given a commission in the R.A.M.C. while Mrs. Crowe joined the staff of the Beaver Club in London.
He left his base in Scotland Jan. 1, 1940 for the Near East and arrived there after a voyage around the Cape of Good Hope. He was posted to a commando unit soon after his arrival and went with that unit to Crete, where he was captured on July 1. His mother was informed by his wife that he was a prisoner, but as yet it is not known locally whether he is a prisoner in a camp in Germany or Austria. His mother has written a number of letters to him but has not received a reply.
His brother, Neill, who is also a resident of Orangeville, was recently called up for service at one of the army training centres.

Card Received
The following card received by Mr. L. M. Frost, K.C., M.L.A., of town, from Dr. W. R. Crowe, formerly well-known medical practioner of Minden, who went overseas and was taken prisoner by the Germans at Crete in May, 1941:


Kriegsgefangeninlagar,
23-11-41.
Dear Les: Ruth tells me she has heard from you and all is well. Everything here is going on O.K. No complaints. Red Cross are doing us proud. No Canadian mail as yet, but should be soon. Regards to Cecil and the better halves.
Will.

Ruth above refers to Dr. Crowe’s wife who is doing active service at the Beaver Club in London, England. A letter written by Mr. Frost to Dr. Crowe on Feb. 21st, 1941, was returned to him Monday as undelivered mail.

Friends of Dr. and Mrs. W. R. Crowe, for 17 years prior to the war residents of Minden, Ont., will no doubt be pleased to learn that they are now both safely home in the Dominion and already have visited their former home town.
Dr. Crowe, it will be recalled, was taken prisoner in the Battle for Crete, while Mrs. Crowe was connected with Beaver Lodge in London during several war years.
Both are reported to be in excellent health.
Media Type
Newspaper
Text
Genealogical Resource
Item Types
Articles
Clippings
Correspondence
Notes
This card is part of a larger collection of World War II personnel clippings. The project began in 1944 at the Lindsay Library. The intent was to gather together as much information as possible on the military record and the service of people from the Town of Lindsay and the County of Victoria (now Kawartha Lakes) who served in the war. To that end, during the years 1944, 1945, and 1946, members of the public donated photographs and updated information about their loved ones. Both library staff and the public saved and donated newspaper clippings. Some of the files contain great amounts of detail, while others have just a name.
Date of Publication
25 Mar 1942
Subject(s)
Campaigns & battles
Capture & imprisonment
Correspondence
Physicians
Prisoners of war
Soldiers
World War II
Canadian Red Cross
Women Soldiers
Royal Army Medical Corps (RAMC)
Beaver Lodge (London, UK)
Battle of Crete 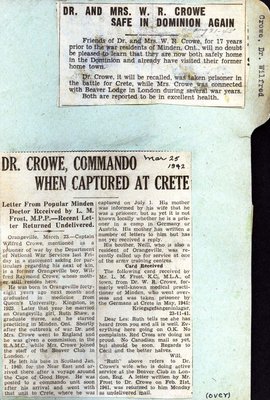