Two Army Ninth Victory Loan chiefs took some application forms aboard the Nieuw Amsterdam Saturday and one minute flat found two red-patched sergeants who decided to sign up before disembarking. So one of the first bonds sold in the forthcoming 9th Victory Loan Campaigns went to Sgt. D. A. Harber, of Halifax, shown signing on the dotted line while directly behind him awaiting his turn is Sgt. A. M. King, also of Halifax. The loan officers, extreme left and right are: Lieut. M. E. Dickerson, of Lindsay, special sales representative for the 9th Victory Committee in M.D. 6 and Major A. D. Grayston, E.D., chairman of the committee. (Canadian Army Photo).

One of the most modern and up-to-date apartment houses to be erected within the next few months will be the North Bay Arms, and the General Contractor will be M. E. Dickerson of the M. E. Dickerson Construction Company Limited, North Bay.

The new apartment block, which will be 65 feet along the front, will have a depth of 142 feet. It will be located at the corner of Fisher and Wellington Sts.

It is understood that it will be the first apartment house in Canada to have the new heating system known as Radiant Heating, with the concealed pipes running like huge coils under the floors, the walls and above the ceilings.

The building will be built of faced brick, backed with structural tile, with steel window casements.

The cost of the new apartment is estimated at $70,000 and the plans have been drawn by Mr. John T. Allan, architect, 12 William St. N., Lindsay.

Media Type
Newspaper
Image
Text
Genealogical Resource
Item Types
Articles
Clippings
Snapshots
Notes
This card is part of a larger collection of World War II personnel clippings. The project began in 1944 at the Lindsay Library. The intent was to gather together as much information as possible on the military record and the service of people from the Town of Lindsay and the County of Victoria (now Kawartha Lakes) who served in the war. To that end, during the years 1944, 1945, and 1946, members of the public donated photographs and updated information about their loved ones. Both library staff and the public saved and donated newspaper clippings. Some of the files contain great amounts of detail, while others have just a name.
Date of Publication
4 Oct 1945
Subject(s)
Soldiers
World War II
Victory Bonds 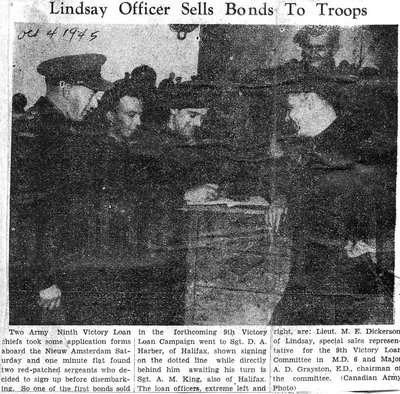