Joy Kogawa remembers her childhood home in Vancouver fondly. The house always had the smell of wood burning in the fireplace. The walls were covered with paintings, photos, and bookcases. The sounds of music, storytelling, and laughter sailed through the air. Her bedroom had toy boxes filled with cars, dolls, and games. A cherry tree stood in the yard outside her window. But her happy days there were cut short.

- The Story of Joy Kogawa

Joy Nayasaka was born in 1935 in Vancouver to Issei parents. As a young child she was interned in the Slocan Valley; after the war, her family settled in Alberta. She attended university there and travelled to Toronto to study at the Royal Conservatory of Music. In 1956 she moved back to Vancouver for the first time. She met and married her husband Gordon Kogawa there, and they had two children; she got a divorce in 1968 and moved to Toronto in 1979, where she has lived ever since.

Her fiction and children's books Obasan, Naomi's Road, Naomi's Tree, Itsuka/Emily Kato, all deal with the experiences of internment camps and the isolation, mistreatment, and shame that came from being exiled. She also wrote a memoir called Gently to Nagasaki which covers this experience.

"To be part of a race of people that was named as the enemy and to try to grapple with that was a tremendous privilege — to be able to live through that, without being killed by it. I think that, as a writer, I was given these gifts of this kind of life and to realize that as an old woman now — to be able to walk through all of that — I just feel incredibly lucky and blessed and gladdened. The ending of my life is so much better than the beginning," she said.

Kogawa started writing and publishing poetry in the 1960s. She published Obasan in 1981, a novel that narrates her own life experiences throughout World War II and dealing with continued discrimination afterwards. It is her most famous book and has been adapted into a children's book (Naomi's Road) and an opera. It won the First Novel Award from Books in Canada, the Book of the Year Award from the Canadian Authors Association, and an American Book Award from the Before Columbus Foundation; it was named one of the most important Canadian books by the Literary Review of Canada.

Kogawa has been honoured with the Order of Canada and the Order of British Columbia, as well as the Order of the Rising Sun from the Japanese government, and the George Woodcock Lifetime Achievement Award. She also has a number of honourary degrees from Canadian universities.

Kogawa uses her fame and popularity to advocate for an end to racism and discrimination. She fought for redress - an apology from the Canadian government for what they had done to people of Japanese descent during World War II.

Joy Kogawa was six years old when her family was forced from their home. They were put onto a train and shipped to a camp in Slocan, British Columbia. The family had to live in a one-room shack. It was a heat trap in the summer and an ice box in the winter. Her family was forced to work on a farm. Joy had to work alongside them in the beet fields — often instead of going to school. She dreamed of going back to her home in Vancouver.
After the war, Joy did not want to be thought of as Japanese. She thought of herself as a white person. It was a way of trying to forget the painful past. One day, Joy came across some letters. They were written by a Japanese Canadian woman from Vancouver and sent to her brother in Toronto. The letters were about how terrible it was to live in a time of so much racism. The writer called for justice. These letters gave Joy an idea. She decided to write a story based on what had happened to her family. She wrote a book called Obasan. As she wrote it, she began to accept herself as Japanese Canadian. And she began to want justice, too.

- The Story of Joy Kogawa

Kogawa has also written about other very personal aspects of her life, including the discovery that her father, an Anglican priest, was found to be abusing children in his care. In her 1995 novel, The Rain Descends, she writes "the story of a woman — the loyal, devoted daughter of an eminent and popular minister of the Church — who discovers in middle age that the elderly father she adores has abused small boys throughout his life.”

I trust that there is guidance and comfort accessible to us as we proceed seeking reconciliations. I trust that forgiveness can happen—not by our willing it, but by our experiencing a welling up of thankfulness when we are able to see and receive gifts that come our way unexpectedly as we wait and struggle to be forgiving. When animosities dissolve between people, no matter on what small scale, I feel a sense of homecoming, of rightness. That’s what I experience of reconciliation. 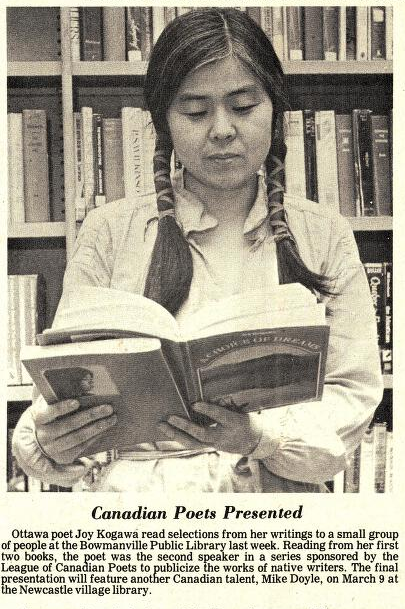 Joy Kogawa giving a reading at the Bowmanville Public Library in 1978. Courtesy the Clarington Public Library. [Learn More]
Back to Exhibits → Previous → Next
Powered by / Alimenté par