After the war ended, many Canadians simply forgot about their and their governments' treatment of people of Japanese descent.

Even decades later, some looked back on World War II as simply an interesting time, not a time of abuse, atrocity, and xenophobia.

An article from 1977, kept in a scrapbook, tells us that a Nipigon resident, Tokesuke Oyakawa, was moved to the camp near Marathon and put to work. He had originally moved to British Columbia in 1907, on a work permit to help build the Canadian Pacific Railway. He bought a farm in BC but never returned to it after internment. His family instead settled in Nipigon and worked for a paper company.
Reading the story gives us a good example of how work and internment camps were described publicly for many years - without any description of the conditions or the brutality used when the government rounded up its own citizens. "Trying" is used three times to describe their experiences. 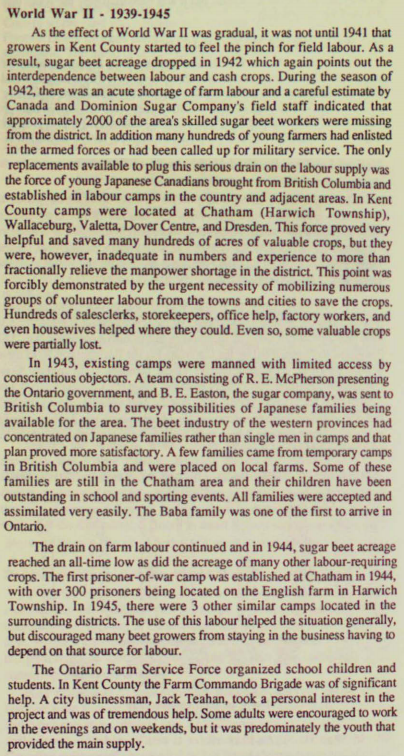 A short article written by a member of the Kent Historical society in 1986 describes white perspective on the labour done by internees. Courtesy the Chatham-Kent Public Library. [Learn More] 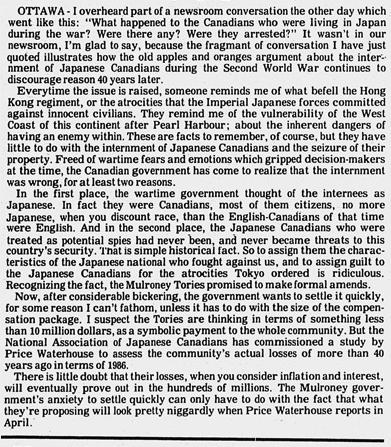 A commemorative plaque outside Thunder Bay. Courtesy the Ontario Plaques website. [Learn More]
Back to Exhibits → Previous → Next
Powered by / Alimenté par