QUEENSTON — The passing of the Baldwin Act in 1849, established in Upper Canada, the system of municipal government as we know it today.

Although the history of Lincoln county's number one township, Niagara, dates back many years before that, the first council was elected by popular vote Jan. 7, 1850.

There was only one polling booth and there was open public voting. Gilbert McMicken, William Woodruff, John McFarland Jr., Joseph Clement and Hamilton Goring were duly elected. The first meeting was held at Queenston Jan 21, 1850, at which time, Gilbert McMicken was named reeve.

There was a Goring on that first council, and today, the name Goring still appears in council proceedings as Frederick S. Goring is a councillor.

In 1902, Frederick A. Goring, the present councillor's grandfather, was deputy - reeve of the township.

It was in 1777 that the first Goring, Francis by name, settled in the district and in the 179 years ensuing, Gorings have lived continuously on the original land settled by Francis Goring.

Francis Goring was a clerk to Colonel Gabriel Christie, then acting quarter - master general for

Canada, having under his charge 37 artificers. He came from England to Montreal at the age of 21 in July 1776. General Christie was superseded and the following August, Francis Goring came to Niagara where he lived the rest of his life, being buried at what is now Homer, Nov. 1, 1842.

It was in Nov. 1833, according to public archives, that Francis Goring thus addressed the land board, “I came to Niagara one month after my arrival at Montreal, and have been a resident of Upper Canada to this day, which is upward to 57 years. I believe that I am the longest constant resident of the district.

He stated that he lived "six miles west of Queenston, located in 1784, but the land was not surveyed until 1787." He ends his letter with, " I now have closed my 78th year and death stands near and whispers I am here." However, Francis Goring lived nine more years.

The Goring family is one of four in the township known to have lived continuously on the same land since the beginning of the settlement of the district.

The first Francis Goring had a large family, four sons and four daughters.

It can be assumed that many families in the township are directly or indirectly connected with the Goring family. A great-grandson of Francis Goring was the late Carl Fisher, a registrar of Lincoln county and father of C. Howard Fisher, a prominent peach grower (now retired) in the Queenston district.

To the first Francis Goring, goes the credit of founding the first in what is now St. Davids, in 1790. The original building was of logs, which later gave way to a frame building about 30 feet square.

Councillor Goring's son, Frederick Dennis Goring, is the seventh generation to live on the land. He also has a daughter: Dale.

According to the archives, Francis Goring was the first to sign a petition (in 1792) to Governor Simcoe, asking for a road from the landing, Queenston, to the Four-Mile Creek, at St. Davids. This road is now Highway No. 8.

There is a vast difference in the council work of 1850 and that of today. In 1850 the total amount raised for all township purposes amounted about $600. 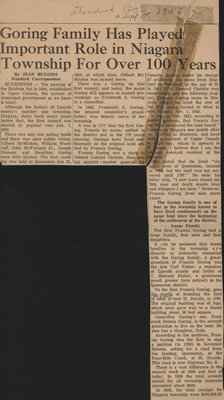