The town council of Niagara-on-the-Lake recently served notice on a St. Davids property owner to either fix up his building or demolish it in the interest of public safety and to improve the appearance at St. Davids' south end.

The building in question is of historic note because it is the last of seven mills that once operated in St. Davids, utilizing the waters of the Four Mile Creek as its source of power

Just how old this three-storey landmark really is, isn't known but it predates the War of 1812. The 28-by-50-foot building was the second of two mills constructed by David Secord, after whom the village was named, shortly after his discharge from Butler's Rangers in early 1784.

The land he received for his war services was primarily at the crossroads of two Indian trails, now Regional Road 81 and the Creek Road. At its north-east corner he built his first mill in 1786. It was followed shortly after by a second one, which is the subject of this article.

Second, his wife, and, later, his children, ran these mills until the War of 1812 started. From that time his wife and older children ran them while he was away, serving in the local militia.

On July 19, 18i4, the Americans burned St. Davids to the ground with the exception of few buildings. Secord's first mill was destroyed in this fire but the one further south, being on the outskirts of the village, was not. It supplied flour to the British troops all during that conflict and for several decades after, under the ownership and operation of the Secord family.

Their ownership was followed by that of the Woodruff family, whose connections with St. Davids also go back to the village's beginnings because the Woodruff's are considered to be its first inhabitants.

Primarily merchants in the village, the Woodruffs did not run this mill but sublet its operation to Edward Willox, who ground wheat into flour between its mill stones for several more years.

Willox in turn was followed by the Black family who operated this mill from 1890 until 1910 when it fell into disuse as a mill.

The Four Mile Creek began to falter as a constant supply of water for the overshot water wheel and progress on larger-scale, electrically operated, roller mills made this mill obsolete.

So the Blacks farmed the land until the mid-1920s, when they constructed a refreshment stand on the front, which they appropriately named the Old Mill Inn. There they sold refreshments and light meals to many tourists and travellers passing by on the old Highway 8 which, until the construction of the Queen Elizabeth Way in the late 1930s, was the sole road into Niagara Falls from the north.

I recently had an interesting conversation with an 88-year-old Niagaran, who recounted her days as a part-time attendant in the Old Mill Inn. She also told me of her childhood days prior to 1900 spent in the Black home behind the mill and how she remembered the mill in operation.

The Blacks sold the mill to "Ife" Stevens, who operated it from just prior to the Second World War until his death in the mid 1950s. It was a popular eating place and night spot during his tenure. It was while he owned it that this writer first toured the premises.

In the cellar, which is 10 feet high and constructed of flat stones and rocks collected in the area, are the original beams supporting the grind stones. The beams are 14 inches square, hand hewn, showing clearly the marks of the broad axe, and are held in place by large wooden pegs. In fact, the main beams, uprights, and joists throughout the entire building are the same size and are as sound as when first erected in the early 1790s.

The majority of the old mill's upper two floors have undergone radical changes over the years but one can still see the original hand hewn timbers comprising it. After Mr. Steven's death, the old mill was still operated as a restaurant by several owners but by 1972 it closed down.

It was put up for sale and a local man bought it with the idea of restoring it to its original state and selling antiques.

However this idea fell through, after some work of a minor detail was done to the building and it was again put up for sale.

Just who the present owner is I do not know, but on touring the premises last Sunday, I realize the anxiety of the Niagara-on-the-Lake council of having it restored or demolished. The old mill currently has a "for sale' sign on it and should know its fate in the near future. Being the last of seven or more mills that operated along the Four Mile Creek is enough in itself to warrant its preservation.

But its historical connection with the Secords and Woodruffs and, its connection with St. Davids' history from its time of earliest settlement almost make it mandatory for restoration, as well as preservation. St. Davids has many old landmarks of historical importance but this one goes back to the days when St. Davids was larger than' Niagara Falls and was one of the most important places in the peninsula, both from a commercial and a military viewpoint.

It is hoped that someone will preserve and restore the historic landmark, especially since so many have disappeared in the peninsula in the name of progress. 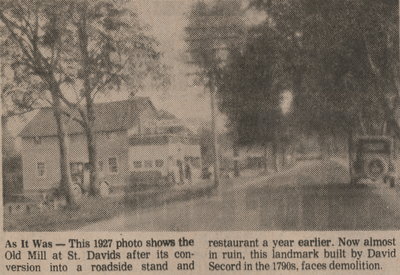