Media Type
Object
Image
Text
Item Types
Memorial works
In Memoriam
Description
The original weathered headstone from the grave of the Unknown Mason, Oaklawn Cemetery, Jordan Station.
Framed photograph (on the wall) of the unveiling and dedication of a new headstone for the Unknown Mason in Oaklawn Cemetery, Jordan Station, Ontario, May 12, 1996, and an explanation of that event:
"In 1877 the body of a male person washed ashore on Lake Ontario near Jordan. There were "certain markings" on the body which identified him as a Mason and he was given a fitting burial by the Masons of the District. A headstone was erected to mark the grave site and dedicated to "An Unknown Brother".
The original stone had become eroded with the ravages of time and the environment, and was replaced on May 12, 1996 with generous donation by Heritage Lodge #703. Approximately 125 Masons of Niagara District "A", their families, and friends erected the new monument at Jordan Station Cemetery.
This shroud was used to cover the headstone until it was unveiled in a fitting ceremony. The veil was presented to the museum at Niagara Lodge #2 on June 24, 1996 by R.W. Bro. James E. James, the District Deputy Grand Master."
Notes
This headstone was replaced co-operatively on May 12, 1996, by Heritage Lodge, No. 703, Niagara District "A", and the Masters' and Wardens' Association of Niagara District "A". These principals considered the Museum of Niagara Lodge, No. 2, as an appropriate depository for the original headstone.
Inscriptions
(on the headstone):
"Here lieth the remains of An Unknown Brother whose body was washed ashore near the residence of Abram Martin, Esq., Louth, on 20th April 1877.
This tombstone is erected to show that while deceased had only on his person certain symbols to distinguish him as a Freemason yet were they sufficient to secure for the remains fraternal sympathy and Christian sepulture.

Dead Voiceless Battered Tempest-tossed
A stranger Friendless and unknown
The wave gave up its dead
A Brother came and saw
And raised above his lonly head
This sculptured stone. 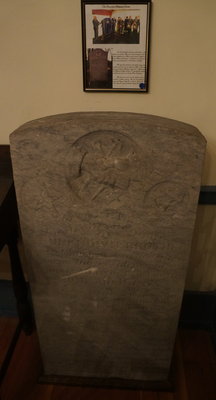 Front page of "The Ontario Mason"
Groups of Related Records