Chief librarian Gerda Molson has turned life at this Niagara library into a real page-turner in the past four decades.

Gerda Molson found herself working inside a kind of utopia compared to what she'd been used to. The new Niagara-on-the-Lake library is considered by many to be a contemporary gem in the town. Its rotunda style is stately, airy and people-friendly.

The $1.5-million building, which opened in 2000 on a lane just off Highway 55, offers modern technology and up-to-date infrastructure.

And the best part, in Molson's view, is that there's actually room for its books.

Molson — who retired Dec. 27 as the chief executive officer and chief librarian of the Niagara-on-the-Lake Public Library — considers the new site one of the town's great new assets.

But the library's latest chapter evolved from controversy when in 1990, the library realized it needed far more room. That led to a decision to build anew and leave the library's cramped courthouse location.

"It was the second War of 1812," said Molson with a weary laugh in an interview shortly before her retirement.

"There was a tremendous amount of conflict as people were so emotionally tied to that location.

"Many feel the decision to relocate was taken with little thought and it was empire building and everything else," added Molson, her voice slowing for emphasis.

"But from the time the decision was made, to building the new library, it was a full 10 years." And it was a move she does not regret in the least: "We were just stuffed to the rafters there."

Much has happened over the four decades that Molson has worked in Niagara's library system, and the changes have been revolutionary for library-goers in Niagara-on-the-Lake.

Molson is a native of Washington state, who emigrated to Canada at 13, and still has a hint of her northwest U.S. accent. She lived with her family in British Columbia, married her husband Hugh in 1961 and moved to Niagara a year later.

Hugh is the former chief librarian at the Pelham Public Library. He and Gerda have two grown children who also live in the region.

Molson — also a former president of the Ontario Library Association — says her career in the library system has been charmed.

"I have always felt that I was amazed people paid me to do this," she said. I've loved doing what I do and it has continued to be always challenging and changing."

Library administration operated almost in another world up until around the late 1960s.

Many smaller libraries had budgets "hardly worthy of a name" and non-professional volunteer staff were common, she said. Eventually, professionalism ruled the day — including Niagara-on-the-Lake's system.

Molson is also quick to point out that she's among those who entered the library system without professional librarian qualifications.

Turning Niagara-on-the-Lake's library around took work. To that end, Les Fowley, the now-deceased past Niagara Regional library system director, had a plan.

"He told me 'if you do this for me, you can write your own ticket in the St. Catharines library,'" said Molson.

Gerda remembered him asking her to bring "some order" to a town library system that was "sadly neglected because of lack of funding and expertise brought to its collection."

At the time, the courthouse library was only open for 10 hours a week over three days. The library itself had been shuffled around areas of that building since the late 1800s.

The 29-year-old knew little of what was in store when she headed up the library with an annual budget of just $3,600 a year. "Well, it sure was interesting," she said with a laugh. "It presented an enormous challenge."

While the shelves were full, the collection verged on prehistoric. The "how to" books dated mostly to the late 1940s and many travel section books were penned in the early 20th century.

There was also no card catalogue, so finding a title could become an expedition.

"Our first step into technology was getting a telephone. Then we did an absolute massive weeding of titles," she said. Many of those were sold to a Toronto old-and-rare-books dealer.

Once the library was in better shape and its modern collection bolstered, another problem presented itself through the 1970s to the 1990s.

Despite a large renovation and expansion in 1972, space eventually became so squeezed, books were being stacked in backrooms and on floor piles. But still, the library struggled along and made do with its sardine-can digs.

"The Internet has also brought tremendous change," Molson added. "But the Internet as a useful and reliable tool is really only happening now."

When the world-wide data bank first became accessible in the 1990s, it was like a "hurricane, where everything was just piled on the floor."

"In my estimation, people don't get sufficient training on what are reliable sites and what aren't." She said libraries have always been responsible for organizing credible information in an accessible way. That includes the Internet.

But no library can do its job unless it can operate properly, said Molson. And for a time, it seemed Niagara-on-the-Lake's old digs would sell it short.

Molson said it was clear that due to lack of space, parking and other reasons, a move was essential. Two professional studies over five years also agreed a relocation made most sense, she added.

Nonetheless, there was an outcry from some residents who decried the loss of the library's historical location and its convenience for people without cars who lived in the Old Town.

After much debate, the new building — two-and-a-half times bigger than the old library — was constructed. Since the move, circulation has risen 40 per cent and the library's current membership of 10,800 is up 36 per cent.

"Getting it built was the biggest and most difficult challenge for me," said Molson, who at age 65, is looking forward to visiting her ailing father in Hawaii. "But it was the right thing."

She thinks that's a natural fit given librarians often help many people in turmoil who seek out information — from parents to patients struggling with a terminal illness.

In the end, they often need an assured and sympathetic hand to help them find that accurate Internet site or life-changing manual.

And it is books — the root of the world's wisdom — that is mankind's base for reference.

"The demise of the book? Well, I don't think so," said Molson, with the quiet self-assuredness of a long-time librarian. "I just don't think so." 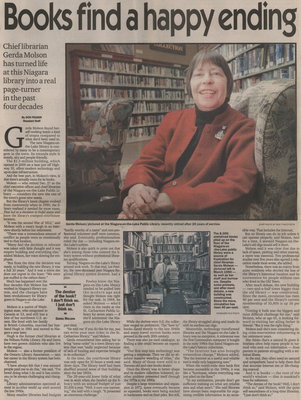