When Gerda Molson accepted the position of president of the Ontario Library Association last week it was one more challenge for the popular librarian in what has become a lifetime of challenges met and conquered.

It was a challenge which first brought Mrs. Molson to Niagara-on-the-Lake 17 years ago when she was named librarian of the oldest library in Upper Canada.

At that time, in 1969, she was working as a librarian in St. Catharines and as a part time job was put in charge of the Niagara library located in the historic Court House.

The library was only open seven hours a week and the municipally supported system was operated by a five member board.

The library at that time was a far cry from the present facility which is considered one of the finest operations in Canada, not only for its many unique features, but for its progressive outlook.

But in 1969 the library was 'just incredible" Mrs. Molson said. The library shelves were filled with books but 90 per cent had copyright prior to 1900 and there was no catalogue in sight.

Within five years Mrs. Molson had eliminated many of these books through sales to dealers keeping the best and making room for a variety of books which would form the nucleus of the library.

Although the Niagara Library dates back to 1800 it has been housed in the former market stalls of the court house since 1858. It was renovated on three levels in 1973 for $53,000 using local initiatives projects, allowing it to become a full time operation. The library is now open 48 hours a week however in the future Mrs. Molson would like to see this increased to 60 hours.

Every librarian has one project that is viewed with special pride and for Mrs. Molson it is the collection of books on local history which has been built up through the years giving the library one of the finest small archives in Canada. The collection includes the early records of Fort George and the St. Marks Collection.

"A community library should reflect community needs and this is a very unique community."

Among the many other programs of which Mrs. Molson is proud is the children's program which grows more and more popular. She can still remember 17 years ago and that first Saturday when five youngsters came to the library for story hour.

"I probably read them Curious George," Mrs. Molson said with a smile.

Later a regional system made possible a film collection and the Niagara Library started its own record collection. Then came the business seminars, the continuing education programs, the theatrical presentations and the many guest speakers as well as a tremendously popular and successful summer adventure program.

"I have been able to maintain my enthusiasm because there were always new doors opening," Mrs. Molson said. The latest door to open at the library is a jump into the world of high tech which will make the current cataloging system obsolete.

A consultant has been hired to undertake a study of automation for the library which would eliminate the need for the catalogue and would handle the job of circulation.

'We are small enough that we can go to a micro computer with our own data base ," Mrs. Molson said noting provincial grants would cover two thirds of the cost.

"We are hoping automation will relieve us of much of the paper work and allow us to become more accessible to the public with the library open for more hours an increase in programming and more story hours."

Meanwhile Mrs. Molson is looking forward to her new position as president of the Ontario Library Association a job which will give her the opportunity to travel around Ontario visiting libraries throughout the province. 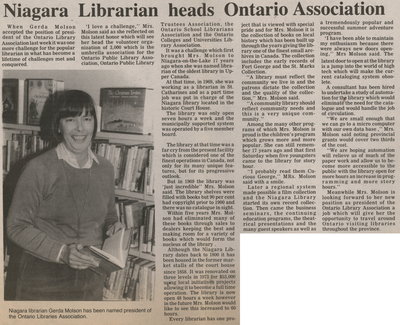