Together these news items give an amazing, detailed day-to-day report on what was happening at the camp and describes conditions in the camp and in the town. They provide a remarkable snapshot of the life of Polish soldiers in Camp Niagara from the establishment of the camp in 1917 to its closure in 1919.

Late in 1914 (November) the PCKR (Polski Centralny Komitet Ratunkowy / Polish Central Relief Committee) "dispatched a three-man delegation from Chicago (including Dr. Teofil Starzynski, President of the Falcons) on a mission to Ottawa 'to discuss the matter definitively with the government there...The PCKR delegation was prepared to offer an 'entire regiment' of four thousand men to be raised by the Falcons, and an additional three-thousand to be formed by the smaller Zwiazek Wojsk Polskich [ZWP - Alliance of Polish Forces], another paramilitary organization." They did not get a positive response to this visit. Interesting as well is the fact that there is no documentary evidence of this meeting having taken place.

On February 10, 1915 a delegation of the Polish Falcons under Dr. T. A. Starzynski visited President Wilson who stated that "when United States will sit at the Peace Conference all efforts shall be made to see that Poland is free again."

In the fall of 1916 Wincenty Skarzynski and Andrzej Malkowski approached the Canadian authorities. They first met with industrialist Sir William Price on September 12 and proposed the foundation of a Polish Legion in Canada. Price was a prominent Quebec businessman and was close to Prime Minister Borden. "In October, Price arranged for Malkowski and Skarzynski to meet directly with Sam Hughes and Chief of Staff, Major General Sir Willoughby Gwatkin. Price urged the project.

"The outline plan, prepared by Malkowski and Skarzynski on September 25, envisioned the creation of "The Polish Legion of Canada" composed of three battalions...Canadian interest in this project was sufficient to send a delegation of General Staff officers to meet with Falcon leaders later in the month at Detroit. At this meeting Franciszek Dziob, the naczelnik (military commander) of the Falcons, joined in the negotiations."

Prime Minister Borden was sufficiently interested that he had External Affairs make a lengthy and formal inquiry to London about the possibility of such a Legion. Colonial Secretary Bonar Law responded quickly that London would have 'no objection' as long as scrupulous concern for American sensibilities was observed.

In the summer of 1916 Jan Maria Horodyski was sent to North America, jointly sponsored by the War Office and the Foreign Service, to recruit Poles to be sent to Canada for the Canadian Army. Horodyski met the leadership of the Falcons who "ordered their Canadian efforts, which had been begun by Malkowski and Skarzynski and later joined by Dziob, to be halted at once. By the end of 1916, Horodyski had become the major actor in the creation of a Polish force in North America."

In December 1916 Horodyski and Dziob met with Canadian officials including General Gwatkin to arrange for the training of a cadre of volunteer officers.

At the end of 1916 the Canadian military authorities agreed to form a Polish officer's training school in Canada. Lt. Colonel A.D. LePan was instructed to lead the training of Polish officers. He describes his reaction to this instruction as follows:

"As Officer Commanding, School of Infantry, M.D.#2, I was rather startled as you may well imagine to receive early in 1917 in Toronto, instructions from headquarters to receive a class of Polish boys from the United States as officers. This strange order was filled by the arrival of 23 recruits...That class was qualified and disappeared into the unknown from whence it had come. Classes in increasing numbers then came to the school till in the summer of 1917 at Camp Borden we had about 150 Polish Probationers in training for officers. Then on September 14th, 1917 came an equally illuminating communication instructing the School of Infantry staff to move to Niagara to take charge of a Polish Army Camp to be established there. Of this camp no information could be obtained as to numbers or duration."


At Banquet given by National Polish Department, Buffalo, NY, March 4, 1919

On January 3, 1917, 23 Falcons arrived at the training school in Toronto and were met by Lt. Colonel A.D. LePan and were accepted into the School of Infantry, Military District No. 2. Originally they were to be part of the Canadian Expeditionary Force. However, Britain was informed that the Russian General Staff wanted the formation of Polish units in Canada.

"The Engineering Building (University of Toronto) was used by the School of Infantry under Colonel A.D. LePan until the spring of 1917, when the training of Polish soldiers expanded so rapidly that most of the school was moved out of the city."

When the Polish Army Camp was set up in Niagara-on-the-Lake not all the residents were pleased. Lt. Colonel LePan reports:

"And on old lady expressed very generally the sentiments of the population when she said: 'Oh My God, these fellows will murder us in our beds', but fortunately before a protest could be made, the foreign invasion had taken place and the people of Niagara-on-the-Lake, while at first sceptical, now speak most openly and enthusiastically of the conduct of these men. Never before, they say, has there been such a quiet and such an orderly camp in that historic place." 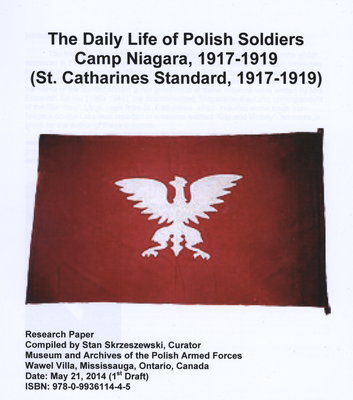