Media Type
Image
Text
Item Types
Cards
Greeting cards
Description
Folded card with black and white photograph of steamer "Toronto" sailing toward Thousand Islands.
Reverse:
"OUTWARD BOUND FOR THE THOUSAND ISLANDS
On a sunny afternoon more than half a century ago, the steamer "Toronto" is approaching the Eastern Gap as she leaves Toronto Bay for the waters of Lake Ontario. For almost forty years, during the summer season, she sailed with clocklike precision every second afternoon from Scott Street, and later from the foot of Yonge Street, alternating with her consort, the "Kingston". Proceeding across the lake to Charlotte, N. Y., (now known as the Port of Rochester), her next call was at Kingston, and as she steamed down the St. Lawrence River, stops were made at Clayton and Alexandria Bay on the American side, followed by landings at Brockville and Prescott. The passage through the beautiful Thousand Islands was among the most scenic cruises in North America.
The "Toronto" was built in 1899 for the Richelieu and Ontario Navigation Company by the Bertram Shipyard on the Toronto Waterfront. At that time, she was the largest and most luxurious passenger vessel constructed for service on Lake Ontario. Her designer, the noted naval architect, Arendt Angstrom, had patterned her after the famous Fall River Line sidewheelers which operated between New York and Fall River, Massachusetts.
Among her best-known masters were Captain E. Booth, Captain B. A. Bongard, and Captain H. W. Webster, who was in command when she sailed for the last time in September, 1938. Ironically, this was probably the roughest trip of her career: heading into a westerly gale, with winds exceeding sixty miles an hour, there was one period when she progressed only sixteen miles in four hours, steaming at full speed. Although cruises on the Great Lakes have faded into the past, memories of voyages in the colourful paddle-steamer "Toronto" will long remain."
Notes
Undated photo but steamer "Toronto" was in use between 1899 and 1938.
Inscriptions
Greetings from Aland Howard (inside a card)
Dimensions
Width: 18.4 cm
Height: 14.3 cm 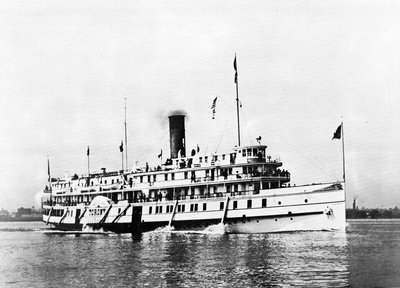