Continuing last week's article on the ships of the Niagara Navigation Company, the demand for passenger service on the Toronto to Niagara route so increased in the early 1890s, that a third ship was added to aid the Chicora and the Cibola.

This was the steamer Chippewa, which took its name from the Chippewa Indian tribe. Work began on her construction in 1892 at the Hamilton Bridge and Ship building Company, Hamilton, Ont., using a design by F. Kirby of Detroit.

The Chippewa was 311 feet long, of all steel construction (the first Niagara Navigation Co. boat to be so built), and was the largest passenger steamer on Lake Ontario at that time. She could carry 2,000 passengers and had engines built by the W. Fletcher Company of New York City. She was a sidewheeler with a walking beam amidships.

In later years, a special Hurricane deck was added to her for the convenience of passengers during rough sailings. The Chippawa was completed in May, 1894 and joined the Chicora and Cibola or the Niagara run immediately. It was the start of her marine life that was to last for 42 years, ending in the Fall of 1936 at the close of that season's navigation.

During these years she transported millions of passengers across Lake Ontario and during the First World War brought thousands of soldiers to and from Niagara Military camp for training. After her retirement in late 1936, she was tied up at her Toronto berth for three more years. Then she was towed to Hamilton where she was dismantled and scrapped between May and September of 1939. Her complete demise came just a week before the Second World War began.

When her sistership, the Cibola, burned at her Lewiston berth in 1895, plans were immediately made by the company for her replacement because of the still heavy demands for service. This replacement ship was named the Corona by Lady Smith, wife of Sir Franklin Smith, a longtime director of the Niagara Navigation Company.

Lady Smith chose this name because this new ship "succeeded the eclipse of the Cibola and represented the hopes and new conditions of the bright sun's rays (or corona)". Like the Chippewa, the Corona was a side wheeler, capable of carrying 2,000 passengers.

She was 272 feet long and was designed by a Mr. Angstrom. The Corona was built by the Bertram Engine and Shipbuilding Company of Toronto in 1895 and was officially launched at the shipyards there on May 25, 1896. Her launching was a gala event and was much written-up in the three Toronto newspapers at that time. The Corona was on the Toronto — Niagara run for all but three of her 33 years Marine service. These three years she spent on the Toronto — Hamilton route.

Her log books still exist and record many interesting and unusual events on her lake crossings. One of her proudest moments occurred when she was chosen to take, the royal visitors, the Duke and Duchess of York, (later King George V and Queen Mary) from Niagara to Queenston, and return, on Oct. 10 1901.

The royal couple was staying at the Queen's Royal at Niagara (on-the-Lake) and went to Niagara Falls for a day's visiting and sight-seeing, which included a reception and tea at Loretto Academy.

From the late 1890s until well on into the early 1900s, all three ships ~- the Corona, the Chicora, and the Chippewa — operated on the Niagara run, providing six trips a day between Toronto and Niagara, and each trip carried a full load of passengers and freight.

The Corona was taken out of service in 1930, due to the great depression and dwindling passengers. She lay idle at her Toronto slip until April, 1936 when she was partially dismantled before being taken to Buffalo, by way of the Welland Canal, for scrapping by Rankel's Salvage Co. Her whistle, bell, wheel, and lifeboats, however, were sold or given to, interested persons as souvenirs.

In 1897, the Great Gorge (electric) Railway was built on the U.S. side from Lewiston to Niagara Falls, N.Y. It ran along the water`s edge at the base of the river bank and provided one of the most spectacular trolley rides in the world. It connected, shortly afterwards, with the Niagara Falls Park and River Railway on our side, which ran from Chippawa to Queenston, via Queen Victoria Park and Niagara Falls.

An electric trolley belt-line service then came about, using a new suspension bridge at Queenston and a new steel arch bridge at the Falls. This belt line also proved to be a great tourist magnet and naturally brought many more passengers for the lake boats.

The Niagara Navigation Co. next purchased outright, in 1899, the Niagara-on-the-Lake dock from the Milloy estate and the property, and harbor, adjoining it, which once were the shipyards for the old Niagara Dock Company. This purchase now connected the lake steamers with the popular Michigan Central's Paddy Miles line — a railway from Fort Erie to Niagara-on-the-Lake, via Chippawa, Niagara Falls, and Queenston — and which now provided a direct Toronto — Buffalo link by water and rail.

The Pan American Exposition (or World's Fair) at Buffalo from May to September, 1901, brought unprecedented business to this water and rail route, so much so that a fourth ship became necessary to handle it.

In 1905 plans were laid for this fourth ship. It was to be 317 feet long and capable of carrying 2,500 passengers. It had 4,300 hp engines and was designed by the same Mr. Angstrom that designed the Corona.

This new ship was named the "Cayuga" after the famous Cayuga Indian tribe and was selected from hundreds of names starting with "C" sent in by interested persons at the Niagara Navigation Company's request.

The Cayuga was built in late 1905 by the Canadian Shipbuilding Company, Toronto, and was launched at the foot of Bathurst Street March 3, 1906. She did not start on the Niagara run until the start of navigation in 1907 but from then on, for the next 48 years, she saw annual service during which time she was destined to carry over 15 million passengers.

She was also destined to be the last of the 15 Lake Ontario cruise steamers that at one time operated out of Toronto. In 1946, the Cayuga was converted from coal to oil when her seven coal-fed boilers were replaced by two oil-fired water tube ones.

In June 1913, the Niagara Navigation Company became a subsidiary of the Richilieu and Ontario Navigation Company, which, in turn, in 1920 was absorbed into the Canada Steamship Lines. The Cayuga performed well for her new owners but in January, 1952, the Canada Steamship Lines announced- her service would be discontinued because of the lack of passenger business and it appeared certain that the last lady of the lake had fallen victim to rubber tires and would be scrapped.

However, a new company of public stockholders was formed to preserve and run her again. Known as the Cayuga Steamship Company, it bought and refitted the Cayuga and put her back into service in 1954.

But within three years, this new company was also forced to suspend operations because of lack of passenger business so the Cayuga was taken to Hamilton where she was ignominiously scrapped in the summer of 1961.

However, her wheelhouse and other pieces were donated to the Upper Canada Marine Museum located in the old Stanley Barracks in the exhibition grounds at Toronto, where they can still be seen today.

The Cayuga's demolition ended more than a century and a half of sail and steam on the Niagara River, half of which years were dominated by the five famous "C" ships of the Niagara Navigation Company. 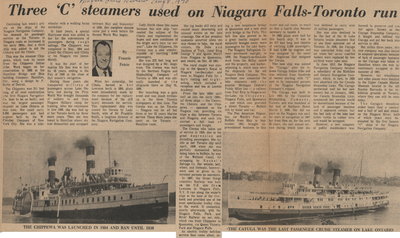