I have recently had several requests concerning the history of the five famous "C" ships of the old Niagara Navigation Company (later the Canada Steamship Line) that operated a trans-lake passenger service between Toronto and Niagara for three-quarters of a century.

These five "C ships were so named because their titles all began with the letter C. They were the Chicora, the Cibola, the Chippawa, the Corona, and the Cayuga. Their story will be told in two parts, of which this is the first, dealing with the Chicora and the Cibola.

The Chicora, which is Spanish for pretty flower, had quite a history before she first appeared on the Niagara scene in 1878 as the first ship of the Niagara Navigation Company. She was built in 1864 by Lairds on the Mersey River at Liverpool, England, as one of three speedy-blockade runners for the Confederate Stat e s of America. The ship was a side-wheeler, 230 feet long, and was christened the "Let Her B." while her two sister-ships were named the "Let Her Go" and the "Let Her Rip".

She saw several trips through the Northern states blockade around Charleston. S.C., before the American Civil War ended in 1865. The close of this war also brought an end to the purpose for which she was created so she was sold to N. Milloy and Co. of Niagara (on-the-Lake) who brought her to Pictou, N.S., and renamed her the "Chicora". With the need for more ships on Lake Superior, the Chicora was taken to Collingwood where she next saw yeoman service exactly a century ago this summer, transporting Colonel (later Lord) Garnet Wolseley and his forces in that noted Red River Expedition to suppress the first (Louis) Reil Rebellion in the Canadian Northwest.

When the American authorities learned of her military purpose, they refused If to let her pass through the American locks of St. Mary's River at Sault Ste. Marie. This necessitated the unloading of the troops and supplies at the Canadian Sault, transporting them over the Canadian portage, and reloading everything back on board the Chicora for the trip across Lake Superior to Prince Arthur's Landing (later Port Arthur and now Thunder Bay).

In July and August of 1874, the Chicora was chartered for the official visit of Lord and Lady Dufferin, (he was Governor-General of Canada at the time) for a tour of the Upper Lakes and the northern districts of Ontario, which eventually ended up in Chicago.

By August of 1877, the stately side-wheeler was again idle at Collingwood and advertised for sale, with the possibility of being scrapped. Fortunately, B a r 1 o w Cumberland, a Canadian Northern Railway agent, whose father, Col. F. W. Cumberland had handled all the details for the Dufferin tour three years previously, saw the Chicora and decided to form a navigation company around her. Subsequently, the two Cumberlands, together with Sir Franklin Smith and Hon. J. J. Foy, formed the Niagara Navigation Company in 1877, operating a passenger service by boat between Niagara (Lewiston) and Toronto. The Chicora was their sole vessel

However, she was 30 feet too long to pass through the locks of the Welland Canal into Lake Ontario, so she was taken to Buffalo, stripped of her wheelhouse and paddle boxes, cut into two halves and taken on two boats to Port Colborne in the late Fall of 1877 for passage through the Welland Canal.

It took five days for this canal passage which required from two to six teams of horses to pull her along the muddy tow-paths. Half the city of St. Catharines is recorded as having turned out to watch the two pieces of the ship go by. The Chicora was put together again in Muir's dry-dock at Port Dalhousie and then towed to Toronto for re-fitting by that noted tug of Fenian Raid fame, the W. T. Robb, of Port Colborne. The Chicora made her first run from Toronto to Niagara June 1, 1878. This same year, the Niagara Navigation Company purchased the dock and water-front lot at Queenston, giving it a Canadian landing place.

day in her history. On that date she was chartered to bring the world sculling champion, Ed Hanlan, back to Toronto for his return home, an event which set Torontonians aglow.

On June 5, 1881, the Niagara Military Camp was established which gave new purpose to the Chicora, for she took hundreds and hundreds of soldiers across Lake Ontario for military training each summer after that.

Passenger service boomed for the Niagara Navigation Company after a late start; so much so that a second vessel was built in 1887. This second ship was also a side-wheeler, with 2,000 H.P. engines brought over from Greenock, Scotland. She was 250 feet long, had her hull built by W. C. White and Co. of Montreal, and the rest of her completed at Deseronto, by the E. W. Rathburn Company. This second vessel was named the Cibola, which is Spanish for buffalo. The Cibola was officially launched Nov. 1, 1887, and joined her sister ship on the Niagara run the following spring. The fare for a round trip on either vessel (which made three trips a day) was $1.40 and thousands of passengers made use of the two ships for picnic, dances, parties, and family outings.

The Niagara Navigation Company began a trans-Niagara River ferry service in 1888 between Queenston and Lewiston, using a smaller, new ferry boat, the Ongiarra. In 1891, the Niagara Falls, Park, and River Railway was instituted between Chippawa and Queenston, going through Queen Victoria Park and Niagara Falls. It was an electric street car line, with power stations in Queenston. The Queenston power station was discontinued in 1898. It connected with the Queenston docks and the steamers coming and going to Toronto.

Business was so good, a third vessel was began for the run in 1892. It was completed in May, 1894. and joined the Chicora and the Cibola. She was named the Chippewa but her story will be told next week.

With the three vessels now on this run, it was customary for one to remain overnight at Lewiston dock for an early morning run to Toronto. One night in June, 1895, the Cibola caught fire at her Lewiston berth. Her upper works were entirely burned off and the vessel went adrift, aflame, down the Niagara River. She was re-captured at Youngstown, N.Y., but was damaged beyond repair; so she was scrapped that same year, after only seven years service. The Chicora continued giving years of active service. She was put in dry-dock in, Kingston in 1904 reconditioned, and largely replated, at a cost of $37,000. The Chicora was still going strong on the Niagara Run as late as 1913, in service with the Chippawa, and her two still-later sister ships, the Corona and the Cayuga. Their stories will be told in my next article. 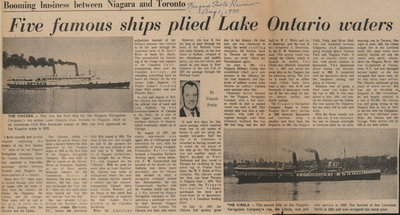