The smell of yellowed silk and dusty leather hangs in a basement corridor of the post office building. Three members of the Chiefswood restoration committee are going through eight trunks that belonged to Pauline Johnson, the Indian poetess, and her sister, Evelyn.

The old trunks are heavy with small, personal articles bearing witness to the character of the famous poetess, and that of her family.

Bisque figurines come from the crisp tissue paper that has shrouded them since Miss Johnson's death. Some are broken, but the pieces have been carefully saved. Rich silks, now yellowed; a wide, magnificently proportioned lady's black beaver hat; a sword, and pages of written material and books, including several journals and manuscripts of Pauline's poems.

Mrs. Ethel Brant Monture, Mrs. Andrew Jamieson, and Mrs. J.C. Hill are doing the work. The belongings have to be carefully unwrapped, identified, and catalogued in preparation for their installation in Chiefswood, the poetess' home on the Six Nations Reserve, when it is restored.

Plans for the restoration are going ahead, the committee members report B. Napier Simpson, an Architectural Conservancies of Ontario expert who was deeply involved in the Upper Canada Village project, has been retained to assist in the work here.

"The family had a fine library," Miss Monture noted as the contests of the trunks were being examined, "There are many valuable old books, and also a few excellent examples of early glass.

"Of course, there are some things that are just trash," she observed, holding up a set of oval, colored pictures of Gibson girls.

"It must have been a sentimental family," Mrs. Hill said. The three ladies have found a few pressed pansies picked, according to a note with them in Pauline Johnson's own handwriting, from the Chiefswood garden the last time the poetess' mother walked there. The family was moving after the death of Mr. Johnson.

"There was a sale at the house in 1886," Mrs. Hill said, "and we would be very interested in seeing any articles that were bought then, and may still be owned by families around here."

Among the belongings that have been discovered is a dress sword, now aged tight in its scabbard, that belonged to a Pauline's father. The original 1856 drawings for the house at Chiefswood have also come to light.

"There is no telling how long we may be here," said one of the ladies, surveying the mounting pile of old articles. "It is going to take weeks to catalogue all this." 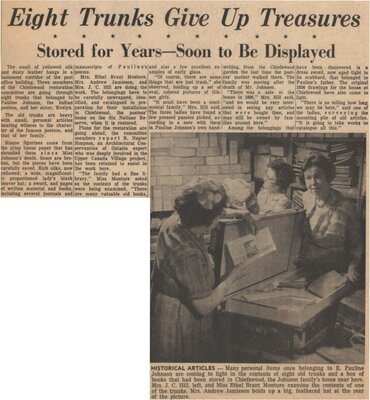