Six Nations Polytechnic is once again leading the charge in the revitalization of Six Nations languages.

The educational institute received a $70,000 grant from the Ontario Trillium Foundation during a special announcement Thursday at Polytech during its annual Indigenous Language conference.

Ontario Education Minister Liz Sandals was on hand to mark the celebrate the grant while she conducted a whirlwind tour of the community last Thursday.

Sandals, who has represented the riding of Guelph as its member of provincial parliament since 2003, said she supports the revitalization of Haudenosaunee languages.

"It's important we work on accessing learning for First Nations languages," she said.

"We are very supportive of your efforts to create more speakers of Onkwehonwe languages," she told the audience of over 200 educators and language learners at Polytech.

Six Nations Elected Chief Ava Hill said band council supports the revitalization languages and proudly introduced herself in Mohawk, saying that council has been receiving Mohawk language lessons at the beginning of each council session for the past year.

"It is very important to us," said Hill of language revitalization. "It's such an important part of who we are as Haudenosaunee people."

Sandals is the third government minister in as many weeks to tour Six Nations.

"A couple of weeks ago, we had the premier go on a private tour (of the Mohawk Institute), said Hill. "She was able to hear a lot of the stories... of the survivors who went to that school, so she has that appreciation of what happened there and how the language was taken from us."

Hill said, "Six Nations is certainly on the (government's) radar. I think they (ministers Sandals and Bennett) both have a true understanding of how important the language is to us."

After the announcement at Polytech, Sandals met with Six Nations council's education committee.

"It's a whirlwind tour and we're so glad she's here," said Hill. "I just want to congratulate Polytech on yet another grant. It seems like they're getting grants all the time and that's because of the fine work of all the staff here at Polytech."

Amos Key Jr., who sits on the board of the Trillium Foundation, said he is pleased Polytech will be able to conduct more language outreach with the grant.

"This is a fine start we're really happy about that."

Six Nations Polytechnic has become a beacon of language revitalization.

In December, the school received ministerial consent to offer the first ever indigenous language degree program anywhere in the world.

Polytech also hosts an annual language conference and last week announced the release of a new app called learn Cayuga that allows users to interact with and test their knowledge of over 500 of the most common Cayuga words and phrases. It is a free app and available for download from the app store. It is not yet available on the Android operating system but will be in the next few months.

The $70,000 grant will ena­ble Six Nations Polytechnic to assess instructional strategies to help them create more speakers of Haudenosaunee speakers in the shortest period of time.

Polytech says Haudenosaunee languages are critically endangered and as such, "this work is deeply important to our language revitalization efforts." 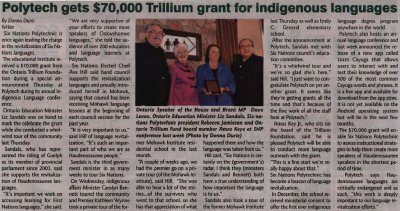