He was there when the Hagersville Tire Fire exploded on Six Nations boundaries.

"I remember those hoses up on the ends of the escalators swinging back and forth knocking the tires off," said Howard (Howie) VanEvery who marked 35 years of firefighting at Six Nations last week.

And there was the tobacco plant fire just two years ago that saw fire services pulled in from Brantford to Hamilton to help ferry water to put out out a fire that smoldered on for days.

"It took a long time to get it out with all that tobacco inside burning, but we kept it inside; it didn't get out to anything else."

And he has been there when firefighting equipment was a case of a coat, a pair of rubber boots, gloves and a sort of helmet.

"All we had at one time was hip boots and an over coat and rubber gloves and a hat," he said.

He chuckled, "it was kinda hard driving the truck with rubber boots you can't hardly bend your leg," he said.

"Yeah, I remember the Hagersville Tire fire," he said.

"It was big. The fire was all over. We had the big water truck at the time," he said and chuckles. "It was pretty cold. There wasn't any heat in the truck so we had to take turns driving it," he laughs but adds, "We got heat in our vehicles now."

He said he remembers going out and putting out car fires. "I used to go by myself and put out car fires on a Friday or Saturday night. I'd get there and put 'em out and the look around and be all by myself," he said and laughs.

And there was the tobacco plant fire on Sixth Line. "We had everyone from Brantford, Onondaga, Scotland, Mt. Pleasant, Hamilton, Hagersville, everybody was bringing water.

"It took a long time to get out with all the tobacco inside it kept burning."

He says firefighting has changed over the years.

"We should learn from that. It is different fighting tobacco fires, it smolders and smolders."

There is a lot of training to be a volunteer firefighter.

"It is a lot of training but you need it and things are changing so we have to keep up."

He remembered a medical call he said that made him laugh.

"We go out to this medical it was a shortness of breath call. We got there and the guy looked at us and said there was nothing wrong with his breathing. He had a sore leg. We all laughed," he says.

But there is sadness to the job when firefighters can face deaths of community members through accidents or a suicide.

"You try not to think too much about the suicides, or car accidents, the friends or family we lose," he says.

"We try to help as much as we can. You know, you think if we can get there maybe we can help save a life."

And in one case that's exactly what happened.

"There was this case of a suicide we got called for. We got there in time to cut him down before anything happened," he said softly, remembering.

The young man was in his 20s at the time more than a decade ago.

"Me and my niece (firefighter Angela VanEvery) got there and I ran up to the house; they said he was around back."

He said "I got my wire cutters out. He was hanging from the clothes line outside. My niece was there shouting he maybe still alive and I ran over and we cut him down. He hit the ground and there was a loud grunt like and we knew he was alive."

He stopped for a moment and said, "that's when I realized this is why we do what we do. We want to help."

Last week he was presented with a plaque marking his 35 years of service making him the department's longest serving volunteer.

"He is the living legend of the Six Nations Fire Department," said Fire Chief Miller.

"He is the walking memory of the fire department."

"Howie was my first captain and it was like we had tough parents back then with all the training. But it was all to make us better emergency responders and firefighters."

He said, "the first place my wife and I came after my daughter was born was to the fire hall to visit with Babs and Howie. That's the kind of family atmosphere we had and what we are trying to get back to."

"He is a huge part of the department and the epitome of volunteerism and dedication to the fire community service as far as fire fighting goes."

He said "Howie" is "not afraid of change. He realizes things have changed. The way we fight fires changes. The world has changed. He is fully certified. He never backs away from any changes in training. He is a good reason why we have been able to have so many successes. That happens when you have someone with that much clout and investment and is willing to change and move forward. It sets an example for everyone else. Especially in emergency services we need to evolve. Everything is constantly changing, building construction has changed drastically over the years, cars, even the kinds of emergencies we respond to."

He said "When Howie first got on the department they didn't have the Jaws-of-life. They had a pry bar and bolt cutters."

Fire Chief Miller said "Howie has seen a lot in 35 years and had a lot of experiences."

"He saw the Hagersville tire fire. larger fires like when the Mohawk grounds burned down, we were there in 2006 during the Caledonia riot. We were all trenched in on that as emergency responders."

"Howie" says he has four years to retirement.

"But I'll probably keep dropping by and bug em at the department, make em mad and leave," he jokes. But for Howard VanEvery, it's been 35 years of serving Six Nations, because, "I just want to help." 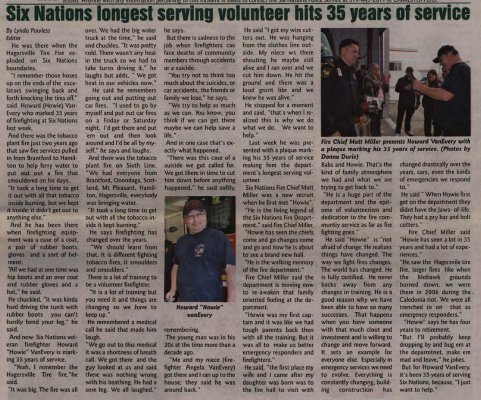