The Ontario government announced last week it is committing $97 million in funding for aboriginal post-secondary education over the next three years.

"All Ontarians - including First Nation, Metis and Inuit learners ­ deserve equal access to high quality post-secondary education and skills training programs that will help them get good jobs," Moridi said. "Aboriginal institutes are an important component of the post-secondary education and training sector in Ontario and our increased investments and the development of a policy that better establishes their role in the broader sector will create learning environments for students that are anchored in the diverse cultural and linguistic traditions of Aboriginal communities."

"Investing in the talent and skills of First Nation, Metis, and Inuit learners is central to our government's plan to build Ontario up. That's why we are working so hard to help all learners access Ontario's world-class postsecondary education system."

The investment includes an additional $5 million to support the sustainability of Ontario's nine aboriginal-owned and operated learning institutes located throughout the province.

"The enhancements are intended to strengthen aboriginal institutes' capacity to support aboriginal learners by growing existing programs and courses, and providing services to aboriginal learners to facilitate retention and completion of these programs," said Ministry Spokesperson Belinda Bien.

The extra $5 million in funding will be distributed three ways:

"Investments like these are essential to closing the credential attainment and labour market outcomes gap, and to ensuring that all Aboriginal learners have the skills training and formal education necessary to actively participate and succeed in today's economy," said Bien.

That amount won't change with the new funding announcement.

However, with the new funding announcement, $35.8 million of the $97 million will go to a different pot called the Post-Secondary Education Fund for Aboriginal Learners that will fund students' post-secondary educations.

Ontario is also investing $1.5 million in 2015-16, in a one time donation, to support Indspire's Building Brighter Futures Bursaries, Scholarships and Awards program. Indspire is a national charity based on Six Nations that provides funding to post-secondary aboriginal students.

Nine aboriginal institutes in Ontario work in partnership with colleges and universities to offer recognized degrees, diplomas and certificates.

"The Truth and Reconciliation Commission taught us how much more we can achieve when we commit to working in partnership with aboriginal communities," said Zimmer. "That is especially true when it comes to education, which plays a central role in reconciliation between our peoples. This investment in aboriginal institutes will provide the opportunity for more aboriginal learners to pursue high quality postsecondary and training opportunities."

"Six Nations Polytechnic is committed to working in partnership with colleges, universities aboriginal institutes and the Government of Ontario to ensure that education for Indigenous learners affirms cultural identity and that education about Indigenous peoples builds understanding across cultures," she said. "Through respectful partnerships we can build mutual recognition, mutual respect, and shared responsibility for maintaining positive relationships with Indigenous peoples into the future for the benefit of all." 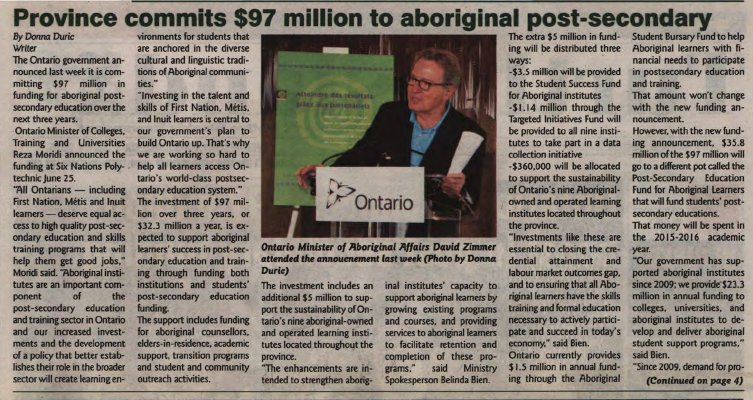