The transition to a new child welfare agency on Six Nations could come as early as next year.

Tricia Longboat, executive director of O Gwadeni:deo (Taking Care of Our Own) says they just need to tweak their policy documents for resubmission to the Ministry of Child and Family Services for approval before moving into the transition phase.

The pre-designated agency, located at Stoneridge Children's Centre, will also have to undergo a site visit from ministry officials before moving into the transition phase.

"Aboriginal people should be delivering child and family services in their own community with their own people," said Longboat. "Now, it's being recognized by the Ontario government. That's what the legislation is saying: we're going to support your right to do this."

The takeover of child protection services on Six Nations is years in the making.

Six Nations almost took over its own child protection services in the 90s and even received designation from the ministry to take over child welfare services, but that never got off the ground, said Longboat.

"Band council declined," she said. 'I'm not sure why. Nobody ever gave us a reason."

The latest push to reclaim the protection of Six Nations children came in 2011 after some community members complained about the services and practices of the Brant Children's Aid Society, Native Services Branch, which has since moved off Six Nations and is now located in Brantford.

A community working group was formed and public meetings were held to gather community input on how a new child protection model should look.

Community members said in surveys they want a child protection service based on traditional Haudenosaunee principles and values, with a focus on placing at-risk children with extended family and keeping them within the community instead of being moved to a foster home off­-reserve.

"For the last four decades, we had (the native services branch of the CAS)," said Longboat. "There's always been native staff in there. In the last two decades, that service was unsatisfactory to the community. They said 'we're not going to put up with it anymore.'

"There's so many things that make us different (from the NSB) but one of them will be our code of practice," said Longboat. "Our code of practice is based on principles from the Great Law. Our model has cultural components incorporated in it. It's going to be the touchstone for everything that people do."

The new agency - when designated by the ministry - will offer families alternative dispute resolution as opposed to going to court, said Longboat.

"People complain," said Longboat. "There's going to be lots of complaints. How do you get people to feel like they're heard? Everything can't be hammered out in court."

O Gwadeni:deo recently received another $600,000 from the ministry to continue the planning and policy stage (Stage 8), which consists of setting out policies and procedures and hiring and training staff.

It will be run by a community board of governors that will include spots for two clanmothers.

The agency will solely be a protection agency, whereas the existing Six Nations Child and Family Services department, operated by band council, will continue to carry out prevention programs.

There are currently six aboriginal-run child protection agencies designated by the ministry in Ontario.

Longboat says workers will undergo "decolonization" training to help them approach the work with more Haudenosaunee values and principles in mind.

The agency will service all self-identified Onkwehonwe, Inuit and Metis people within Brant County, New Credit and Six Nations.

Longboat said the agency wants to be a "community voice" and not a "dictatorship."

"We want it to be reflective of the community," she said.

When they become designated, people will still be asked to report suspected child welfare complaints to the agency and once the complaint is screened, that will determine where the case goes, said Longboat.

"(The complaint) could be protection and prevention...the difference is we're only protection," said Longboat. "If it's a prevention issue, that's when the protocol comes in place where we have a protocol with (community agencies) and we will then do the referral.

Funding will come from the ministry and be funneled through band council before coming to the agency, said Longboat. The agency will be overseen by a commission of community members, independent from any political organization in the community.

The transition phase (stage C) will consist of recruiting and training staff, developing a transition plan, finalizing workload projections, finalizing protocols with other organizations, and initiating implementation of the new agency. 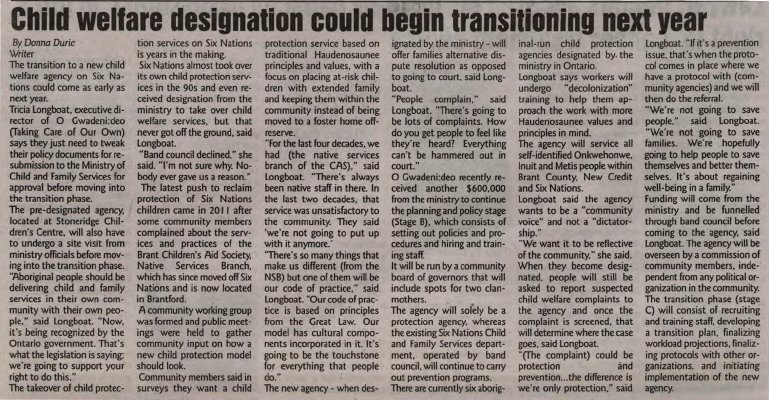