SIX NATIONS - One of Six Nations' most respected elders, Onondaga Chief Peter Skye, born in 1932, completed his earth walk Wednesday, November 5, 2014 at his home surrounded by family. Funeral service and burial was held at Onondaga Longhouse Six Nations on Saturday, November 8, 2014 at llam.

As he was entering his twilight years, Chief Skye became an important mentor to Confederacy Secretary Leroy Jock Hill, who has many fond memories of times spent together and lessons learned.

"He came from a generation that learned their language first and learned English later," recalls Hill of his friend. "That's one of the things he told me, he was about 10 before he learned English. There aren't many within his age group that can say that."

Chief Skye was a fluent Onondaga and Cayuga speaker who also spoke some Seneca and the preservation of the languages was very important to him.

"His commitment to his position as a Chief and to his people I think were his finest attributes," Hill reflects. "He was very dedicated to the ceremonies and even doctoring people through traditional medicines. We used to work together a lot doing medicine ceremonies. One of the things he taught me was to do one thing at a time in order to do it well. He himself had training by his elders."

In fact, one of Skye's most influential mentors when he was growing up was Hill's grandfather Joe Logan and the late Jake Thomas' father David Thomas, both Onondaga Chiefs.

"He used to tell me that he sat between those two guys at the Onondaga longhouse, and listened," says Hill.

"His advise to me was, 'stay on a good path and study these things that I learned from your grandpa and Dave.' That is why he started mentoring with me because he wanted me to learn because he thought I might have a brain for it."

Although Skye knew he was born in 1932, because he was not registered with a Canadian birth certificate, he had to guess the date but was never actually sure about it.

He was able to avoid the residential school system by hiding when the "child stealer" would come around.

"I took him to McMaster University once to an Indian Education conference and he and I were guest speakers," recalls Hill. "He told of his experience when he was a kid when a man would ride around the community stealing children and enrolling them in the residential school. I think he was probably a truant officer, but he was seen as a child stealer.

"He said they always had to keep an eye out for the child stealer in the neighbourhood and the kids would go and hide."

He remembered hiding up in the attic and he'd look through a knothole while his mother dealt with the man at the door. At that time, he didn't understand English at all.

"That must have been terrifying to a child when you gotta be worried about someone coming around stealing children."

Chief Skye was a powerful and well-respected figure on the Onondaga bench and will leave a big pair of moccasins to fill. 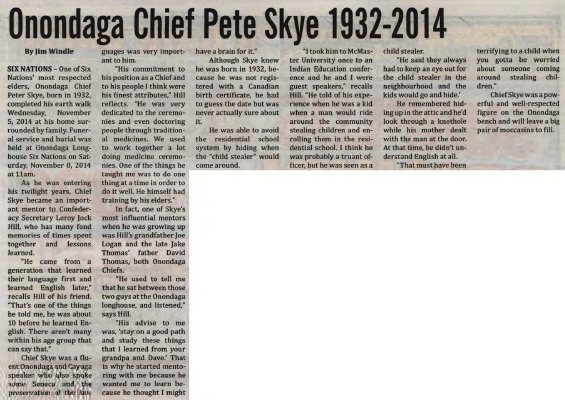