Full Text
Conservatives give $1.4 million to Polytechnic for languages
By Donna Duric, Writer

The funding injection comes just months before a federal election but McColeman insists his team had already been working on obtaining the funding for the past two years.

"We've been pushing for this kind of funding and movement forward for the health of indigenous education for a long time," said McColeman.

The grant equals about 10 per cent of $15 million the Conservative government has promised for First Nations post-secondary education.

"The Conservative government set up this funding for the purpose of expanding indigenous education at a post-secondary level," he said during a special ceremony at Polytechnic last week announcing the funding. "It's my responsibility to make them (Six Nations) aware the funding exists and encourage them to make applications, which they did.

"I am proud that our government is supporting both First Nation and Inuit learners and the Six Nations Polytechnic," McColeman continued. "Through specifically tailored curriculum and skills training, this project will ensure that students are better prepared to participate fully in Canada's growing economy."

"Having one of the most notorious residential schools in our territory (the Mohawk Institute) the people at Six Nations are only too familiar with the legacy of residential schools," said Jamieson. "The impacts of the unbalanced and unhealthy relationships across cultures has touched all of us at Six Nations in some way. Part of our path in reconciliation at Six Nations involved the creation of Six Nations Polytechnic as our people understood that part of recovery included reclaiming education for our purpose as Onkwehonwe.

"SNP (Six Nations Polytechnic)," she continued, "holds a special obligation to the Six Nations community to be the formal post­-secondary education institute to ensure our indigenous knowledge and languages do not disappear off the face of the earth. The funding received from the Government of Canada through the Post-Secondary Partnerships Program is critical as it supports programs that affirm cultural identity while developing understanding across cultures. These two outcomes are essential to student success in education, training and employment and to maintaining positive relationships with Indigenous peoples into the future for the benefit of all."

"I think it's really exciting," said Miller. "We're always struggling to find money but we have to struggle even harder to keep the money.

"It's a good thing it's an election year," she joked.

However, she said, "I know it's important to preserve our languages and I know a lot of the money is going to go toward keeping our languages alive. Phil's done a lot for us since he's been an MP."

Aboriginal Affairs and Northern Development Canada's post-secondary education programs are intended to support First Nation and Inuit students and provide them with the opportunity to acquire the skills needed to enter the labour market.

"Our government is delivering results for Canadians and supporting measures that will help create jobs and opportunities for aboriginal people," said federal Aboriginal Affairs Minister Bernard Valcourt. "That's why our government continues to support initiatives that will create concrete and lasting results in the lives of aboriginal students. This is about getting the skills and training they need to find and keep a good job and improves their overall well-being."

The funding will be spent on the following programs: 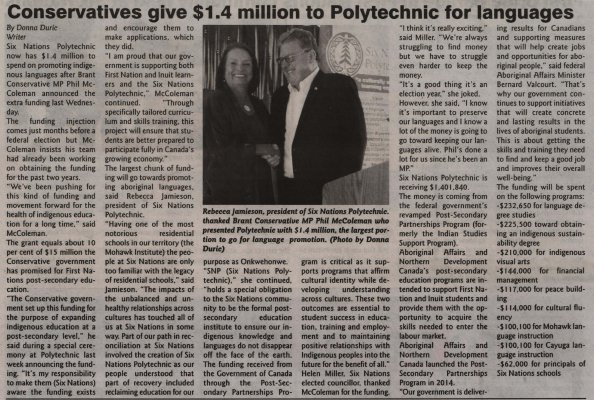