There was a polar dip in freezing Lake Erie on Jan 1 this year.

Then Kayanase was approached and they jumped on board the youth unity train and donated the landscaping.

Next came the gazebo and benches, made by the construction students at the Ogwehohwe Skills and Trades Training Centre.

And there is a beautiful iron structure sign mounted on wood at the entrance to the skate park that reads "Six Nations Skate Park" that was fashioned by the welding students at OSTTC.

Almost two years ago, about 10 youth came to Six Nations Band Council with a dream: a dream for a brand-new, state-of-the-art Skate Park for local youth to enjoy.

That dream has come true.

Last week, those same youth celebrated the grand opening of the beautiful new skate park after fundraising for the construction of the entire project themselves.

The youth did not ask band council for money. They just asked for land.

The youth did the rest.

Former elected Chief Bill Montour says "that was one of the best things our council did was recognize the youth can do anything if given a chance.

"It gives me comfort knowing we have real leadership coming up in our community," he said.

He said he dropped by the skate park.

"They amaze me what they can do on those boards. I tried it once, years ago, and almost broke my neck," he said and laughed.

He said he was proud of the community as well "It was a community effort, not a council effort led by the youth," he said.

The sleek and modern new skate park, which cost around $250,000 to build, is located beside the Community Hall parking lot.

Corey Martin, chair of the Skate Park committee, was one of those youth who first approached council.

He was beaming during last week's ceremony.

He joked about the struggles the youth had prior to the opening of the park trying to find a space to use their skateboards in the community.

They used to skate in the parking lot at the community hall and frequently got kicked out, he joked.

"They hated us," he said, laughing.

His friend suggested building their own skate park.

"My mom (Rachel Martin) overheard us one day and said 'why don't you'"?

So they made a presentation to the-elected Chief Bill Montour at Six Nations Band Council's annual general meeting in 2013 asking for land to be donated to the initiative.

In less than 20 months, their dreams turned to reality.

"We ended up raising $270,000 in a year," he said. Corey's mom, Rachel, who acted as an advisor throughout the two-year project period, said the youth are an inspiration to others.

The skate park was designed by New Line Skate Parks in consultation with the youth. Local greenhouse Kayanase did the landscaping.

The youth sourced out dozens of donors, in-kind donors, and corporate sponsors.

They received $55,000 from the Ontario Trillium Foundation alone.

"The day has finally come," she said. "It was about 20 months ago when these kids came into the community hall and said, 'We want some land for a skate park. We don't want any money we just want the land' and we said alright.

"They're real role models for our community," said Hill.

One of these fundraising activities included a polar bear dip in freezing Lake Erie on Jan. 1, 2014.

"The youth did it on their own with the guidance of a few people and it's taught them quite a few things," said Hill.

Corey's mother volunteered countless hours helping the project come to fruition and acting as a signing authority for the fundraising account at the bank.

"She's been a real role model for parents as well," said Hill. Brant MPP Dave Levac couldn't make it to the ceremony but Hill read a letter from him congratulating the youth on their hard work.

"The youth deserve a special credit from the leadership for the determination demonstrated in the completion of the project," said Levac. 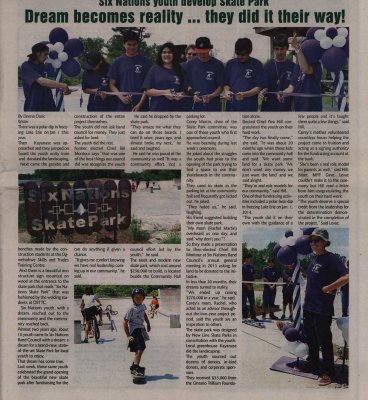