When guests arrived for Ganohkwa Sra's 10th anniversary celebrations last Wednesday they were greeted with balloons, song, food and a tour.

Part of that tour is a living memory to violence in our community. While guests inside the centre devoted to healing family violence, celebrated a 10th birthday party, outside a small, slightly obscured plaque is surrounded by a white pine tree and cedars in a quiet, almost sombre spot.

Next to the white pine, a symbol of Hodenosaunne belief in a Tree of Peace, embedded in a rock is a plaque in memory of Paula Joy Martin, one of Six Nations most publicized victims of domestic abuse.

Paula Martin was killed two years ago in a domestic dispute that saw her husband sentenced to prison in her stabbing death.

The plaque is a haunting reminder of the kind of work counsellors, therapists and volunteers are undertaking at Ganohkwa Sra, Six Nations crisis shelter and housing for victims of abuse and violence.

Meanwhile inside the building, workers and community members were celebrating the centre's decade of work. George Johnson is a volunteer. He said he found, in particular, the men's shelter, the only in an aboriginal community in Canada, has taught him, "what it's like to be on the other side. I've learned, since I've been a volunteer here, that men can be abused to. Most men don't say anything...it's a macho thing, but they can be hurt just like women, from their spouses throwing things at them, hitting them, from verbal abuse. We've had men in here who's spouse have beat the hell out of them."

He said he knew one such person. "He was abused by his wife and he took it. Finally he came here and they helped him learn that he didn't have to take that kind of abuse. "Now he says, the man is emotionally stronger and more confident.

Roger Hill is another volunteer. He says working at the men's shelter has increased his awareness of different forms of abuse. "It helps you understand why people do what they are doing and what you can do to get help."

Wayne Martin is a Men's Program counsellor, he says men are coming to the shelter for help. "They've been abused mostly as kids, physically and sexually and they start being abusive to their families and they want to stop, they want to change. So, they come here for help." 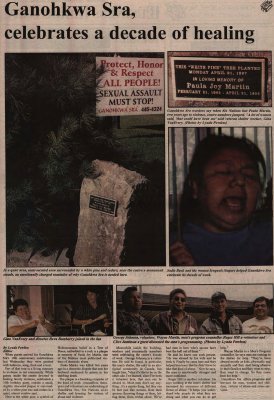