The initial board meeting follows the return home of the Kanata Dancers from two montbs of touring elementary schools throughout central Los Angeles.

The six person entourage performed 91 shows of prairie style and pow wow style dance all for public school students with the exception of two performances at other venues.

This is the second consecutive year the Kanata dancers have toured the central L.A. school district, "we have an American agent who organize our entire U.S. bookings," says Naomi Powless.

Among the Ontario tour stops are Toronto, Ottawa and the London area. However the entourage has scheduled bookings in British Columbia, Washington and New Zealand.

Powless believes her travels with the theatre group has been beneficial, "I've made friends with people all over. People who have really influenced my life and my way of thinking. From the dancing itself I've gained a lot of confidence."

Dancers range between the ages of 18 to 30. Currently there are two levels of training for Kanata Dancers, "level one and level two, so far we have 8 supply dancers," said Holly Powless, Kanata treasurer and public relations officer.

To show their appreciation for community support the Kanata National Culture Society is planning to host an event in Six Nations Veterans Park July 21 with a special performance by the Kanata Dancers. 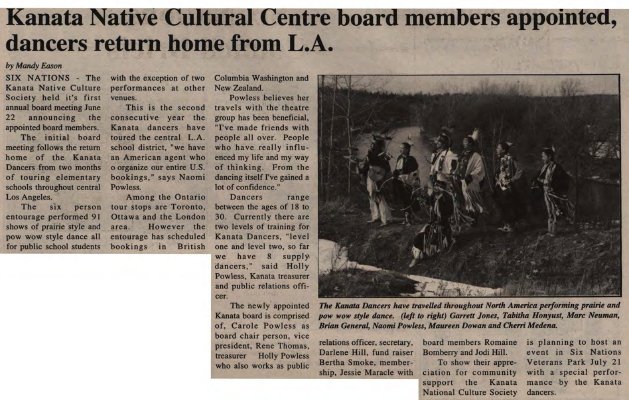