SIX NATIONS - With the framework of the new Grand River Mills Company firmly in place, Six Nations Chief Wellington Staats is confident that new jobs will be flowing into the Oneida Enterprise Park in the not so distant future.

"A lot of people in the community can't see what has been done here over the last couple of months, but it takes a while to build this foundation," said Chief Staats Wednesday morning at the site of the new Grand River Mills company.

"We're about a week behind schedule, but that is nothing really," added Staats. "All in all, I'd say it is going pretty good right now."

The Grand River Mills factory is 136,000 square feet and will be the new home for a $16 million dollar textile company, one that the former Six Nations Economic Development Commission have brought to the community in hopes of creating jobs for the people of Six Nations. The Grand River Mills Company is scheduled to begin operations in August of the year 2000.

"We are very pleased to be in a partnership with Six Nations," said Grand River Mills President Peri Casinadhen, a 51% shareholder in the company. "This will be the only mill in Canada that deals with producing top quality yarn like the product that we will produce."

Casinadhen immigrated to Canada from his native Sri Lanka in 1984 and says that he has been in the textile business for over 30 years. Casinadhen says that those from the community who will be employed at the yarn factory will go through some extensive training in order to operate the high tech equipment used to develop and produce the yarn that the company plans to sell world-wide.

"Most of our product will be sold in the United States," said Casinadhen. "This technology that will be used in this factory is very complex. We are not into random sampling where our product is concerned, we are into total quality control."


Casinadhen says that the Grand River Mills company will manufacture 22,000 pounds of cotton a day into yarn, and the factory will be open seven days a week except for Christmas and July. The factory will create approximately 70 textile related jobs (no experience necessary) and five administration and office jobs.

"I want the very best in quality and productivity," said Casinadhen. "This is the latest technology in this type of textile manufacturing and I don't want to be a guinea pig in all of this. I have to make things work."

Casinadhen says that this partnership with a First Nations community was more than just a business decision and he feels good about moving this textile company to the Oneida Enterprise Park site.

"There were other possibilities as to where we could have moved our operations, but I wanted to bring this company to Six Nations and have 90% of the management to be from Six Nations," he said. "My goal in all of this is to one day have this whole operation operated by the people of Six Nations 100%."

Chief Staats says that the Oneida Enterprise Park will bring in business interests from other companies once the factory is up and running.

"You can't help but have spin off for other jobs and businesses to come here," he said. "60% of the work force here so far has been native and we've had a lot of people apply for jobs at the factory through GREAT (Grand River Employment and Training)." 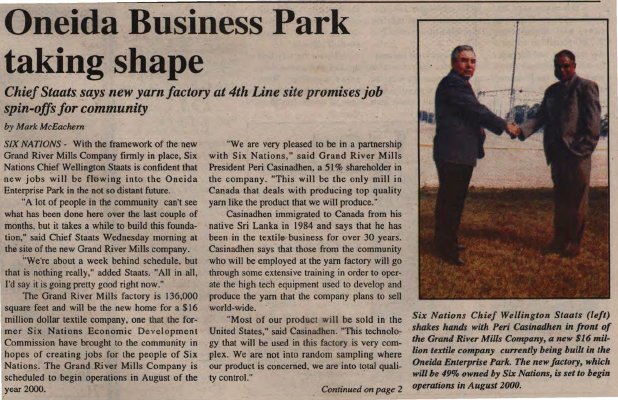