OHSWEKEN - Ontario's Minister of Aboriginal Affairs, David Zimmer, engaged in a finger pointing, shouting session that resulted in a testy stalemate with the Confederacy Chiefs after a meeting between the two Tuesday.

In a quick press scrum before the meeting Tuesday Minister David Zimmer said "We're looking forward to a productive meeting. We're here to discuss a number of issues" as he headed into a board room at the Grand River Employment and Training (GREAT) centre that houses among other offices the Haudenosaunee Confederacy Chief's planning department the Haudenosaunee Development Institute (HDI). Several Confederacy chiefs were seen at the meeting including Mohawk Chief Allen MacNaughton, the lead negotiator during the 2006 talks, Onondaga chief Pete Skye, Cayuga Chief Blake Bomberry and several other chiefs and clanmothers before the doors closed.

The meeting, sources said, did not go well.

Mohawk Chief Allen MacNaughton told the Minister that path was a step backwards.

Chief MacNaughton explained who the Haudenosaunee are and invited the Minister to continue the communication process that has been laid out between the Confederacy and Ontario.

He explained the band council was involved in the 2006 table discussions but not as a governing body, "We even let them have a voice to take into consideration their concerns but they were not there as a political body, they were there as our people."

At one point, sources said the minister threatened to leave and yelled and began pointing his finger at Confederacy legal adviser Aaron Detlor, who told the Minister forcing the Confederacy to table with the band council and Haldimand County is "cultural genocide."

Zimmer told the meeting "we don't see the harm in having them (chiefs) come to a table with multi-parties."

Detlor told the Minister "You are asking the Haudenosaunee to morally set aside who they are as a people to get into your discussions. That's cultural genocide."

The Minister demanded he retract the statement. Detlor refused.

Chief MacNaughton told the minister the purpose of 2006 table was to remove third party interests from Kanonhstaton (the former DCE).

Chief MacNaughton said Ontario is in a position to revoke the application for a housing development and declare the road, a non-road.

When Minister Zimmer said he was leaving the room to caucus Onondaga Chief Pete Skye told the Minister. "I am going to ask you to sit down."

Chief Skye told the minister "Indian Agents have been trying since the 1800s to assimilate the Five Nations into a band system."

Onondaga clan mother Gloria Thomas asked Zimmer, "why would you ask us to go back to a process that doesn't work."

The Minister mentioned the need for safety and security at the "DCE", which is registered under Ontario.

Chief MacNaughton told him, "you come to the table with the attitude of standing by your Ontario land registry and we stand by our land registry. We have registered Kanonhstaton under the Confederacy's land registry."

Cayuga Chief Blake Bomberry told the Minister "the Ontario land registry was built on theft, murder and coercion. Ontario stole the lands that's what the registry is made up of."

A source said "The chiefs and clanmothers were strong and stuck to their position that they have a process."

Minister Zimmer left the meeting inviting the Confederacy to join his table with the band council and Haldimand County.

Mohawk Chief MacNaughton told the Minister "I will leave you to continue to engage in the process we established."

In the meantime at Kanonhstaton, HDI director Hazel Hill work will continue. "We are proceeding with the instructions of our council to secure the property and further the rehabilitation of the land."

She said work will be undertaken in cutting the grass, clearing the weeds, planting trees and clearing the pond area.

"We will be planting more trees, cutting the grass, clearing the pond area. Bringing the site back more to its natural state," she said.

So far she said the fence construction and rehabilitation of the lands have gone well. "Everything has been great. The neighbours for the most part have been great."

The fence has been a sore point for Ontario who despite meetings with the HDI and chiefs claimed the Confederacy Chiefs were acting "unilaterally" in constructing the fence.

Ontario held discussions in May and June about constructing a fence around the site.

"The fence was put in place to help keep the peace," said Hazel Hill.

During construction of the fence marijuana plants were found growing in the backyard of a Thistlemoore St. home.

The home owner was found to be licensed to grow marijuana for medicinal purposes but OPP Constable Mark Foster said those private licenses will expire shortly. Only licensed facilities will be able to grow medical marijuana. 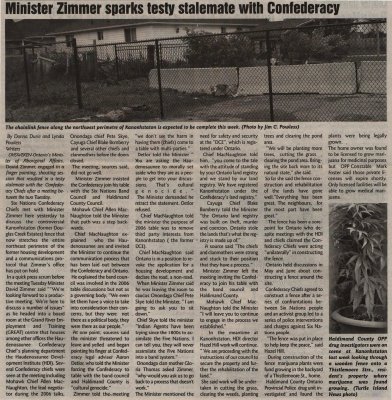