Full Text
Brewery off the ballot, alcohol regulations only
By Lynda Powless and Donna Duric, Writers

Instead, band council will be holding a referendum on alcohol regulations only in January. But approval of the regulations could still see the brewery built at Oneida Business Park.

Matt Jamieson, SNED director, told band council Tuesday night he thought the community was "confused" over what they were voting for after SNED held a series of information sessions recently.

"There's a bit of confusion through our community engagement process where the community is expressing some concerns that we are proceeding down two parallel paths," said Jamieson.

"It's creating confusion in the minds of the community and how we're going to decide to move forward on the issue of alcohol and possibly this beer project. Based on this feedback, we are suggesting that we alter our strategy."

The controversial proposal stems from a chance meeting Jamieson had two years ago in Toronto with Jim Brickman, owner of Waterloo-based IPA Enterprises. Council was first approached about the project two years ago.

Brickman is offering to finance a $2 million water line expansion from Stoneridge to Oneida Business Park needed for the brewery operation.

Six Nations also stands to own 90 percent equity in the project.

Six Nations does not have any alcohol regulations in place.

Kahnawake approved alcohol regulations in 1995 and since has approved 52 permits for bars, restaurants, grocery outlets, ($475 annually), retail and wholesale outlets ($950).

Kahnawake Alcohol Beverages Control Board has put caps on some of the areas, said Lisa Morris, administrative assistant.>

"The board did discuss the numbers of permits out, verses the population and decided some of the areas had reached their saturation point," she said.

Kahnawake's territory totals an area of 48.05 square kilometres with a band membership of 8,000 with a large number living off reserve.

The board allowed for 20 permits each for bars, restaurants and grocery stores. Grocery stores had reached their saturation point at 20 permits but so far 16 permits have been issued for bars and 13 for restaurants.

There are four retail and wholesale outlets. "We have someone who wants to manufacture wine products. It's a do it yourself outlet but it falls under manufacturing."

She said the regulation of the industry has been beneficial to the community. "Before the regulations we had nothing. We had people who wanted zero tolerance for alcohol but it's not an option whether to have it or not. It's already here. It's not feasible to say that you are not going to have it here. It's here. The community decided to regulate it."

She said twice a year Kahnawake social services holds server responsibility training that anyone serving alcohol is required to take.

"It's beneficial because it trains servers on how not to serve someone too much to drink."

Akwesasne has a bylaw prohibiting the sale of alcohol in place and Grand Chief Mike Kanentakeron Mitchell said Council is not contemplating making any changes at this time.

At Six Nations economic development manager Jamieson said SNED took the brewery project off the vote to follow the same path it has followed with all of its projects.

The community has never been given the option to vote on any of the economic development projects.

Instead SNED holds community enpgment sessions and collects what it calls "qualitative" responses from the community, as opposed to quantitative. That engagement process does not rely majority numbers for project approvals.

"The way we assessed community support was through a qualitative process," he said. "They gave us verbal feedback...and all of those submissions went into a final report and based on that final report we made a recommendation to council that we had heard favourably from the community."

He added, "We want to stay true to that process." Jamieson said the SNED team shifted its strategy as a result of the community's "confusion" during the past few community meetings held on the issue.

The referendum will focus specifically on the alcohol question.

Jamieson said, "The beer plant is entirely contingent on a successful referendum that allows such an activity to happen."

Coun. Helen Miller said regulations would make the reality of alcohol consumption on Six Nations safer for the community.

"I think people are confused," she said. "I've been hearing people say, 'we don't want alcohol here because of our children'...but it's already here. People are renting halls to hold dances and there's no regulations. They could stay open until six o'clock in the morning if they choose; they can serve whoever the hell they want to serve; but people seem to think it's not here. I don't understand that. They think we're asking if we want alcohol on the reserve. It's already here but it needs to be regulated. We need to make rules...we need to give a license to people to serve alcohol. We could change the drinking age to 21 if we choose. We can make it safer if we had our own regulations. The alcohol regulation law is going to make it safer for the community."

Some Six Nations clanmothers have already issued a firm 'no' to the project and Coun. Carl Hill said from the feedback he's received, the project "ain't gonna happen."

If the community says no to alcohol regulations, the laws surrounding alcohol will remain status quo, said Jamieson. 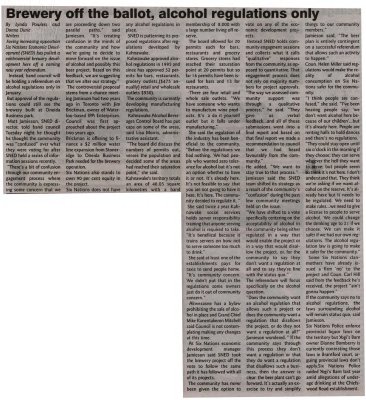