BIRDTAIL SIOUX FIRST NATION, Man. (CP) - Some residents of this reserve are looking to oust their chief as a rash of sudden deaths plagues the community.

They say Chief Nelson Bunn - an alcoholic with a lengthy criminal record - has only been in his office a handful of times during the last year. In that time, there have been seven suicides and 20 more attempted suicides.

Also, one man was hit by a train, two people died in a house fire and another person died in a fatal shooting. Alcohol was identified as a factor in many of the incidents.

"Our leadership is not listening to us and people are giving up hope," said former chief Henry Skywater. "I believe that's what's leading to our young people committing suicide."

Bunn admitted it has been at least two months since he was last in the band council office, in part because of treatment for alcoholism.

But he added that since he returned from treatment, he has spent most of his time in Winnipeg meeting with government officials to find a solution to the crisis. He said he'd try to be more visible within the community.

"We have to deal with this crisis and I'll be there every day," Bunn said.

With a population of only 550, Birdtail is one of the smallest Indian bands in the province. Its suicide rate has been about eight times higher than the Manitoba average.

Some band members say the chief, who was sentenced Monday to 60 days in jail for impaired driving, isn't the right person to be leading the community in a time of crisis.

He has 10 previous convictions for impaired driving dating from 1968 to 1991. His latest sentence will be served on weekends.

He has previous convictions for impaired driving dating from 1968 to 1991. His latest sentence will be served on weekends.

"He has a lengthy record," said Crown attorney Shauna Hewitt. "There's all kinds of charges on it from fraud to assaults."

"I think that if he's going to be a leader he should be there, said Chris Benn, who works part-time for the band as home and school coordinator. "I think that if we get a new chief and some new councillors changes will be made."

Bunn said he hasn't been around because the deaths in the community have affected him deeply and personally. It was his sister and nephew who died in the house fire.

"After the death of my sister I took to drinking and I just got out of treatment three weeks ago," he said Wednesday.

Bunn spent most of the month of June in an alcohol rehabilitation centre in Saskatchewan. He said he is now dry and is considering going to a follow-up session in Kentucky.

He said band councillors have worked within the reserve, while he's tried to solve the community's problems from outside.

He said he has a verbal commitment from Health Canada for funding for a crisis treatment centre that will help people when they return from treatment centres outside the community and help prevent crises before they occur.

At least two band members have approached Indian Affairs about their concerns with the current leadership.

Skywater, who lost to Bunn in the last band council elections, said that if the leadership situation rent leadership.

Skywater, who lost to Bunn in the last band council elections, said that if the leadership situation hasn't improved by the start of August, he will suggest that the membership try to take over the band council office. 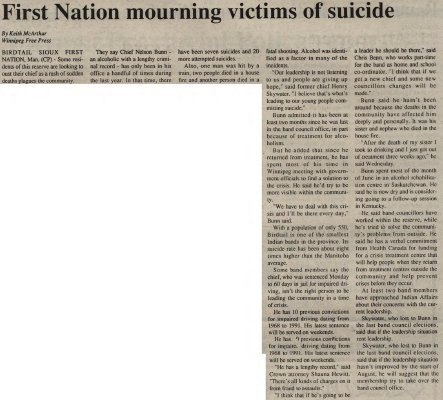