Think, work hard, be honest, and take care of yourself ­ that's just one piece of wisdom offered as part of GREAT's (Grand River Employing and Training) conference to empower Six Nations women.

"Lifting Our Spirits - Discovering Your Potential" ran from 10 a.m. to 6 p.m. including lunch, information on education and self-employment, free massages which were favourites, and inspirational speakers.

The conference began a GREAT initiative to get at least 150 women on Six Nations back into the work force and school and is funded by Status of Women, Canada. About 150 people attended the conference through out the day. Men were also welcome.

The conference included a fashion show, free massage services which were a favourite, economic development information, lunch, and a slew of inspirational guest speakers.

Six Nations woman Jan Longboat told a crowd of listeners how her elders became her catalyst for change. "Sitting with these elders at their knee - I wanted to be just like them," she said.

"All they would say is make good choices and decisions in your life." She said growing up around elders forced her to ask herself: "What is my potential as a woman?"

Longboat said she worked hard when she was younger, making her lunch and hopping on trucks. "You didn't know where you were going, or what you were going to do that day. We worked very very hard."

She said a key to her family growing up was communication and that people have to learn to listen. "We had a big round oak table," she said. "We could ask any question we wanted to ask and say what we wanted to say."

Cayuga sub-chief Leroy Hill, a guest speaker at the conference, says traditionally women play an important role in society. "They're care givers in our society. They nurture and they help people grow," he said.

He explained traditional roles like faith keepers and clanmothers. "Faithkeepers also do caregiving for people gathered for ceremony, clanmothers look after the family, the clan, and the community at large. She councils the people, and gives guidance and advice in a loving and caring way."

He said women have a gift from the Creator to be a little more attentive. "Values in our traditional culture are being applied. It's kind of an ongoing thing at GREAT. They're trying to combine the two (traditional roles) in the modern times we're living in."

Elvera Garlow, executive director at GREAT, said the conference was a success.

"One of the main things was the survey for clients and service providers." The surveys, of which about 150 were completed, asked about barriers to women in the workplace and also about solutions.

Garlow said a report analyzing the survey is due out in May.

"The speakers they had told their stories. How they got where they are; how they overcame those barriers."

"It touched everyone's area of work," she said.

To stay updated on employment initiatives and opportunities visit sixnationswomen.com 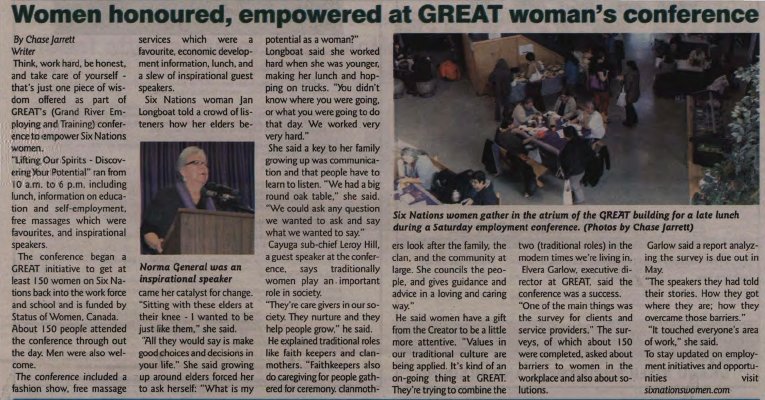