Six Nations Band Council is one step closer to finalizing an accommodation agreement with Brant County that is aimed at bringing the benefits of development on unceded land within the Haldimand Tract to Six Nations.

The agreement, dubbed an "accommodation charter", is an offshoot of the Six Nations/Brant County Green Energy Economic Accord the two parties signed in 2009.

Brant County voted to accept the terms of the agreement at a meeting last week.

As part of the agreement-in-principle. Brant County is offering Six Nations Elected Band Council support in solving land claims, employment and training opportunities, and investment opportunities if Six Nations partners with them on a green energy project at the Brant 403 Business Park.

"It's unfortunate band council is choosing to go down this road," said Aaron Detlor, a lawyer with the HDI. "Band Council seems to be endorsing that the land in the Haldimand Tract has been surrendered and that is not the case."

In addition to the proposed project at the business park, the agreement offers Six Nations the chance to partner with Brant County in the conversion and rehabilitation of the Paris dam to generate an estimated 600 KW of hydro power. Six Nations will be offered a minimum of 15 percent economic interest of the power generation company, according to the document. The agreement also talks about unspecified "development opportunities" throughout the county.

"The County of Brant will actively support Six Nations in their participation with various business ventures located in the County," it says. "This support will be conditional on the subject lands being appropriately zoned and where necessary a site plan agreement is signed.The County of Brant will use its statutory powers under both the Municipal Act and the Planning Act to assist in facilitating such endeavors so the they become mutually successful initiatives."

According to the report, the accommodation charter has been accepted by Six Nations council in principle "subject to further public consultation" which will be "shortly taking place."

"Similar to other economic strategies, Six Nations will receive input and advise of any suggested revisions," it says.

Although the agreement is not finalized, David Johnston, general manager of economic development for Brant County, said they adopted it in "good faith" until band council holds public consultations with the community.

"There may well have to be changes," said Johnston. "In the end, we'll all prosper from it."

There is no word on when the public consultations will be. Elected Chief Bill Montour and band council Communications Officer Karen Best did not return Turtle Island News calls and e-mails seeking more information.

In the meantime, Johnston presented the agreement to the province's new Minister of Aboriginal Affairs, David Zimmer, at a special convention in Toronto yesterday to get his seal of approval on it.

"We (asked) for letters of support on our green energy projects," said Johnston.

He said the agreement does not negate Six Nations' ongoing land claims with both the federal and provincial government and that it is an attempt to seek out economic development opportunities with Six Nations to help alleviate the community's 30 percent unemployment rate.

"We are trying to create jobs and draw Six Nations people to share in the benefits," he said. 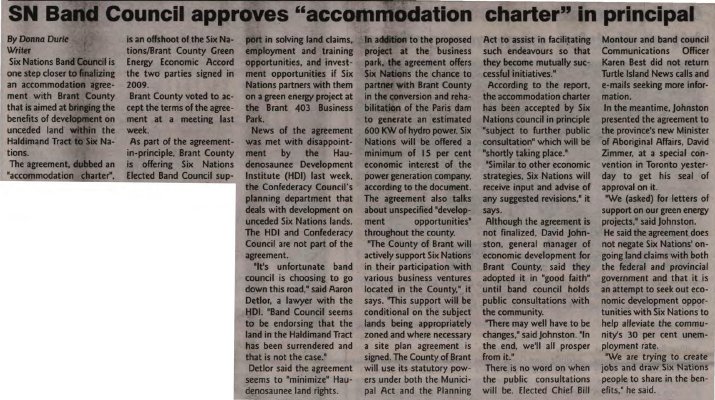