ST CATHARINES - In a precedent setting court decision Ottawa has been ordered to pay $5,000 to aboriginal groups that spent the past eight months in a legal battle with the federal government only to have a judge rule they were in the wrong court.

The Niagara Peninsula Aboriginal Area Management Board, Niagara Regional Native Centre and Mizweeiik, an aboriginal employment agency in Toronto, will begin their legal fight all over again in Federal Court in Toronto after a St. Catharines judge concluded last week he had no authority to hear their discrimination case.

"This a setback but it's not going to stop us from fighting," Vince Hill, head of the Niagara Board, said outside the court.

"This has been (the federal government's) approach all along to dealing with aboriginal issues, to just drag things out and hope they (aboriginals) will forget about it.

Ottawa ordered to pay for court delay
(Continued from front page)
But that's not going to happen here."

Hill said the issue is far from dead. "The $5,000 was awarded for the delay by the federal government in bringing this in as an issue. We had discussed it, in May during preliminary action but they never pursued it until now."

Hill said the award is unusual. "It's really unusual for this kind of award. Its kind of precedent setting."

The three groups launched a constitutional court case last May claiming the government discriminated against non-reserve Indians when it changed the distribution of Indian job training funds in 1996.

Before the change, some of the funds were used to run training programs for urban Indians at places such as the Niagara Native Centre in Niagara-on-the-Lake.

The training funds are now controlled through band councils and their agencies, and non-reserve dwellers face "a pile of red tape" trying to access job help," Hill said.

After months of fighting the case in provincial court in St. Catharines, a government lawyer argued successfully that any lawsuit against the federal government belongs in Federal Court.

He said a provincial court doesn't have the jurisdiction to bear a lawsuit against administrative actions of the federal government. But be also questioned why the federal lawyer didn't act sooner to have the case moved if it was in the wrong court.

The fact the case went on for so long likely means the groups wasted money on unnecessary preparation and legal work, the judge ruled, and awarded them the $5,000 to offset that expense.

"I hope this sends a message to the government that they have an obligation to avoid unnecessary delays," said lawyer Chris Reid.

Support agencies for off-reserve natives, such as the Hamilton-­based Niagara Peninsula Aboriginal Area Management Board, asked for a separate training fund agreement with the government, but the request was rejected.

That left urban natives having to apply for training dollars through their home reserves, and finding in many cases, they were no longer considered members.

Lawyer Chris Reid argued this requirement amounted to a denial of their mobility rights under the Canadian Charter of Rights and Freedoms.

"The issue is that government has made this money available for all Canadians, but my clients have been denied a chance to share in the programs," he said.

"That excludes off-reserve communities from any control over these funds and that is a violation of their Charter Rights," he said. "There's really nowhere for non-­status natives to go for help."

Government lawyer Michael Morris argued the provincial judge could only hear the case if legislation itself was being attacked as unconstitutional. If an administrative decision is unconstitutional, he said, the only appeal is to the Federal Court of Canada.

Reid asked the court for a special award of costs against the government because of the delay, arguing much of the work he has done over the last eight months has been wasted as an entirely new case will have to be developed for the federal court.

Quinn ordered the government to pay $5,000 towards the natives' costs and added he was surprised that Reid had only billed them about $25,000 for his work to date.

Reid said an appeal is possible but he is more interested in arguing the real issue. "Our goal here isn't to make new law on jurisdictional questions, we want to get the main issue dealt with as soon as possible."

Reid is hoping for a federal court date in February.

Hill said the issue is much broader than just training dollars. "The way the government is downloading services, it's telling off reserve natives we have no say in how the dollars are spent because in the majority of cases, we have no voice in our communities.

Hill said off reserve natives are unable to vote for councils who are spending the dollars. "At Six Nations we can vote for the Chief but not the councillors who advise him. In other communities you can't vote at all."

Hill said it has become an issue of rights. "The government is telling us our rights end at the reserve. We're saying they are portable. We take them with us."

Court ordered to pay court costs
(Continued from page 2)
majority of band councils in Ontario. They don't allow them to vote or give us full voting privileges. With that, off reserve people don't have a say in the decision making process. That's where our case comes in."

Hill maintains the federal government needs to do its homework.

"It's the federal government's responsibility before they hand over transfer dollars to do their homework. By not having full voting privileges, we don't have a say as to where dollars go once they're handed over." Hill said the new agreements have limited projects that were in place in off reserve training centres. Organizations like friendship centres or housing groups that provided training programs are not able to do so.

He said the case isn't challenging anything the band council has received. "That's their decision how they use it. We don't blame them one bit for developing their infrastructure down there. The issue is the way the federal government deals with us once we leave the reserve. Their view is, we leave our rights behind once we leave. We say we carry them where ever we go." (With CP files). 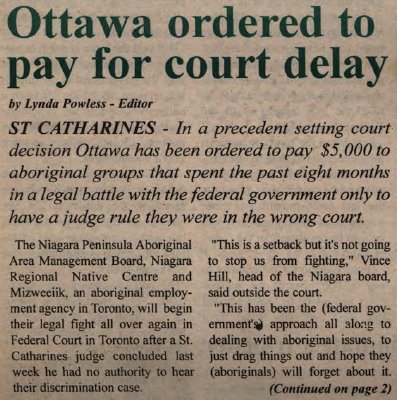