A lack of capital dollars for healing projects may see some Aboriginal Healing Foundation funded projects operated in condemned buildings or crowded quarters in aboriginal communities.

"We can access program dollars easier than capital dollars. So what happens is, we end up running some programs in condemned buildings."

She said at Six Nations, social service programs, "are in every nook and cranny. We're even in condemned buildings," because of a lack of funding for building."

And Aboriginal organizations are worried they won't meet rushed deadlines imposed by the Aboriginal Healing Foundation for some of the $350 million in funds slated to help survivors of residential schools.

The Aboriginal Healing Foundation announced last Thursday it would now begin accepting applications for projects aimed at healing those who suffered from the residential school experience and their children.

But the rushed deadlines may just end up excluding some organizations.

"We've been waiting and waiting for them to get their guidelines and criteria in place but now with just two weeks to get something together, we won't be able to meet that deadline," said Tuesday MacDonald-Johnson, Six Nations Social Services director.

Georges Erasmus, Chair of the

(Continued on next page)

Projects in condemned quarters
(Continued from front page)
Board of Directors of the Aboriginal Healing Foundation says the $350 million received from the Federal Government almost a year ago, will begin making its way into the communities "soon."

But the communities have yet to hear of the move.

Gina VanEvery from Ganohkwa Sra said she hadn't heard or seen anything on the announcement. Ganohkwa Sra operates healing projects at Six Nations and has been known across the country for its innovative programming in helping victims of abuse and violence.

"I can't respond. I haven't seen anything. I haven't heard anything," VanEvery said.

Tuesday MacDonald-Johnson, director of Social Services, says while the funding will present a number of opportunities "to look at more of issues on the social aspects. There is a lot of disappointment in the fact that we were given a really short turn around when there was no criteria out previously."

She said Six Nations may not be able to meet the deadline. "If we meet the first round of proposals it is really questionable."

She said she was surprised at the shortness. "Considering the interest of communities has been really strong. Everyone has been waiting not everyone put something on paper. We were waiting to see what was there so we can match it with community needs and proper planning but two weeks doesn't allow you to do that. That was a real disappointment."

And she said a lack of capital dollars creates a Catch-22 situation.

"I don't know how many times aboriginal organizations, dealing with social and health issues, find there is programming opportunities, but how can we possibility identify programming and staff needs, when, we have no place to put them."

She said at Six Nations social services programming, "We're in every nook and cranny of the community even condemned buildings

She said the federal and provincial governments are trying to push a centralization of services.

"They want a one stop shopping perspective but if you're going to do that and try to coordinate you need a centralized location or it's not done effectively."

The foundation has developed a handbook that includes four project funding themes that cover areas such as prevention, awareness, treatment, after care, community development, capacity building and public education.

The projects fall under the themes of Healing, Restoring Balance, Developing and Enhancing Aboriginal Capacities and Honour and History. Erasmus said the panels will give weight to applications that will "provide lasting, long-term benefits to individuals and communities."

"We want to break new ground in healing, and fund successful healing projects that become models for individuals and communities for years to come," Erasmus said.

Projects could range from healing circles to community based therapeutic healing, outreach healing services, programs directly related to women, to projects that deal with prevention and awareness.

The Foundation will fund training, "we may find experts that might need extra training in this area."

The Foundation will look to educational institutions for training projects, resources and materials and even consider the development of a memorial, something to recognize what has taken place.

He said the situations facing aboriginal communities are urgent. "Our time line at the Foundation is tight. We have to spend or commit the money over the next four years and our first set of deadlines is coming up fast."

Any applications for funding will be reviewed by panels to be established by the foundation. The panels will include experts and survivors.

The $350 million was part of the federal government's Aboriginal Action Plan that also included the issuing of an apology. The $350 million was aimed at supporting community-based healing initiatives for Aboriginal people who have been affected by the legacy of physical and sexual abuse that occurred in the residential schools.

The Aboriginal Healing Foundation, created by aboriginal organizations and the federal government, was established to help select and fund those initiatives. Since it began, Erasmus said, the $350 million has produced an additional $7.5 million in interest. Costs to operate the foundation total $3.5 Erasmus said the entire $350 million will all go out in grants.

Erasmus said "These schools were part of a system designed to eradicate our values, our culture and our language. Unfortunately, it also destroyed part of the soul of our communities, leaving a legacy of multi-generational abuse."

He said aboriginal children have suffered a great deal in this system. They were removed from their homes for long periods of time and kept far away from their loved ones but worst of all, many were subjected to physical and sexual abuse."

He said those children "are now adults, some are seniors, and others have passed away... and in many cases those still with us continue to struggle with serious problems."

He said the "deep wounds of physical and sexual abuse remain unhealed. They continue to cause new abuses today."

He said there are many generations and many groups that have been injured by the schools. "Children, youth, elders, women, incarcerated people, gays, lesbians and physically and emotionally challenged people---all these groups may need special programming."

Since the dollars were allocated, Erasmus said the Healing Foundation has been criticized for its slowness in releasing the money.

He said the foundation has been undergoing a consultation process with Aboriginal people, survivors and the healing community to develop guidelines on the types of programs and activities that should be funded.

As a result, he said, "the Foundation has learned its direction healing activities need to begin with individuals and move out to embrace families and restore balance to whole communities." The handbook is a combination of our effort.

"We have listened to our people's experiences, incorporated many of the basic principals applied by most foundations today."

The Aboriginal Healing Foundation was created by aboriginal political organizations and the federal government who appointed nine members to the Board of Directors, others were nominated.

Last January the Federal Government announced its "Gathering Strength--Canada's Aboriginal Action Plan" strategy that included a commitment of $350 million to support community-based healing initiatives for Metis, Inuit and First Nations people on and off reserve who were affected by the legacy of physical and sexual abuse in Residential Schools.

The Foundation has until 2003 to commit the last dollars. 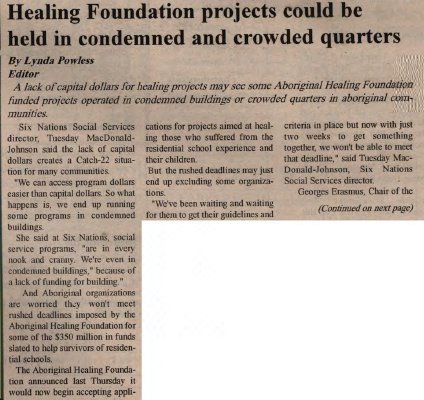