Six Nations Band Council says it wants to test the emissions from the stalled Kearns landfill disintegrator but at least two community members involved in the machine's shutdown two weeks ago voiced opposition to the idea.

About 70 people turned out for a community meeting on Saturday to talk about Six Nations' landfill woes while the fate of band council's $400,000 venture with the Kearns disintegrator remains in limbo.

Two weeks ago, about 50 community members shut down the controversial machine at the landfill amid concerns of toxic emissions from the unit's smoke stack, as well as worker safety and complaints of rancid odours from neighbours in the immediate area of the Fourth Line Road landfill.

Band Council brought the machine to Six Nations in November after years of talks with Nova Scotia inventor John Kearns.

Kearns has failed to sell his machine in the three decades since its invention, with Six Nations set to be the first test community for the disintegrator.

"If we're going to do the testing we've got to start the machine up," she said, which didn't sit well with Robin Maracle, one of the community members who led the effort to shut the machine down.

"We don't want it on," she said. "We don't need to test it. You can see the smoke. Take the machine off the reserve and test it, in Nova Scotia, where he (Kearns) sweet-talked all of you into buying this machine."

No agreement was reached on where and when to test the machine.

Kearns was expected to be at the meeting but he didn't appear.

Bomberry said that Kearns was not at the meeting out of fear for his personal safety, repeating Kearns' unproven claim that guns were trained on him while the shutdown of his unit took place almost three weeks ago.

"The reason Kearns isn't here; when they had the demonstration last Wednesday, somebody threatened his life and said they had two guns pointing at him."

A number of people in the audience tittered incredulously at the claim.

Turtle Island News reporters covering the demonstration did not see any guns or hear any threats. No reports of threats were made to Six Nations Police.

Bomberry explained band council's reasons for settling on the Kearns machine as a solution to the community's waste woes.

He said the current landfill is overflowing.

The capacity of the current dump, opened in 1986, was reached in 2006, about halfway through its expected lifetime, he said.

There are also environmental concerns with the current landfill.

There is no liner at the landfill protecting the water table from leachate.

Bomberry said only the natural clay bed is currently acting as a barrier, with leachate from the landfill spreading out at a rate of a quarter inch per year.

In 2008, band council purchased additional land nearby to add a few more years of life to the dump. That has expired and now, garbage is being piled above-ground because there is no more room in the pit.

"It is beyond at capacity," said Bomberry. "How long it stays open, that will be a decision for council to make in the future."

Council began looking into technology to get rid of solid waste in 2005, said Bomberry.

One company, En-Eco Tops, was contracted to install an incinerator at the landfill but that deal fell through when the company didn't finish the job, leaving band council embroiled in a lawsuit to try and recover $5 million lost in the deal. Bomberry insists band council conducted due diligence on the company before undertaking the project.

He said band council consulted with the community before bringing the Kearns unit here and there was no opposition.

"There was a public meeting (at the community hall). I believe it was July 2012 where John Kearns was here. He talked about his technology. This was all prior to council making the decision to allow him to come here. This isn't something Six Nations jumped into at the last minute."

Public Works Director Mike Montour said the community is at a "crossroads" with the landfill.

"We have so much waste coming in and we're at capacity."

He said the current waste management options, other than incineration, include: continue landfilling, increase recycling or truck it off the reserve.

But landfilling, even if band council clearcuts another site on the reserve to make way for a new dump, is not sustainable and releases greenhouse gases, he said.

There are 136 tonnes of waste buried at the landfill site monthly, Montour added.

Recycling helps divert waste, he said, but it's not 100 per cent.

Trucking garbage off the reserve would cost band council money that they don't have, unless the charge is placed on residents, he said.

"That would cost $ 1.2 million a year," said Montour. "We're suffering budget cuts as it is. It will cost the community $4 per bag of garbage."

Two community members took it upon themselves to help increase recycling at Six Nations and have proposed a partnership with band council to bring the community's recycling rate up.

A.W. First Nations Recycling began sorting garbage at the dump in August 2013. At that time, the recycling rate was two per cent, said Mark Annett, a partner at A.W., along with community member Bill Warner.

It's now at 20 per cent, he said. They also started a free pick-up service for the community in October last year, hauling household recyclable materials to the dump where they hand-sort recyclables from waste.

Since they started, they've collected and diverted 422,000 pounds of recyclable material and saved 805 cubic yards of landfill space, said Annett.

They hope to secure $700,000 from band council in a plan to install an automated recycling facility at the dump to increase recycling numbers to 80 per cent or higher.

They've already sunk $240,000 of their own money into their business. Community members said Six Nations is the "guinea pig" for Kearns' machine and expressed concerns for worker safety.

"Why is he (Kearns) the answer to what we want around here?" asked Rhonda Martin. "He has a machine that he believes will work. It's going to wreck our environment a whole lot faster than we will. Why can't we recycle? There's better solutions than this Kearns machine."

Derek Sandy, another community member who aided in the shutdown, asked that the machine's emissions be tested for air quality purposes.

"Just test it," he said. "How many of us all seen the black smoke coming out of the machine? If the machine works, great, because our community is in desperate need of something. The simple thing is get an air test so we know if it's safe."

Hill said council is in the midst of securing an air quality test for the machine.

"We're getting bids out there. We've also contacted the Ministry of Environment to see if they can do it for free. I agree we need to do the testing. Then, we gotta find the money to do it. We want to assure everybody and assure ourselves with the testing."

She said band council's Physical and Economic Development Committee is meeting with A.W. Recycling to further discuss the promotion of increased recycling here.

"I agree we need to do recycling. I would love to see it at 80 per cent. We have to get our community to recycle and they're just not doing it." 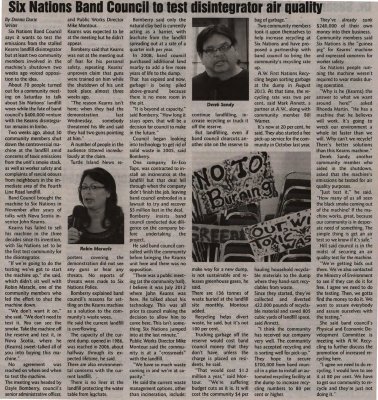