Six Nations Fire Services is over $1 million short in proper annual funding and Fire Chief Mike Seth is imploring band council to do something about it.

In the New Year, band council will look at the service's shortfalls after Seth came to the corporate and emergency services committee last Wednesday saying he's had to go out and do his own lobbying because of what he said is a lack of council support for the department.

Seth said the Six Nations' Fire Department is functioning at one-third the standard of other communities of similar size. It currently receives about $900,000 a year in funding, but just to operate adequately, the department needs at least $2 million.

"Based on what I know of non-native communities of similar size and circumstance, we're nowhere near that," he said.

Six Nations has the same risks and hazards as those other communities, but has to deal with them at a much lower budget, he said.

The fire department is lacking in proper funding, staff, firefighters and equipment, Seth told the committee. The department currently has 36 personnel, including administration and volunteer firefighters, but needs 85, he said.

This past summer, on July 23, a massive fire engulfed a local cigarette manufacturing warehouse on Sixth Line.

The fire, which broke out around 5 p.m. that took over 100 firefighters to extinguish and wasn't put out until well after midnight. Seth said that fire stretched the department beyond its limits and demonstrated how much work needs to be done to improve the service.

"During that fire, every weakness that I've identified over the years was clearly shown," he said.

There were not enough Six Nations firefighters and not enough tankers to carry water to the blaze, he said. Every single firefighter from the service was paged to respond and 26 out of 33 total Six Nations firefighters showed up, with the remaining seven unable to because of personal reasons or being away on vacation. It took over 100 firefighters, including personnel from four surrounding fire departments, to put out the massive blaze. It was one of the hottest days of the year and cooling ponds and emergency medical staff had to be brought in to treat exhausted and overheated firefighters, said Seth.

Councillor Ross Johnson agreed something had to be done to improve fire services.

"We've always been under­ funded. It's something we should be looking at for the safety of the community."

Understaffing is one of the biggest problems, said Seth. "The department is under­staffed in all aspects. There are times we'll respond to calls where a motor vehicle fire should have a minimum of five people on site. We've got two. I remember days when I used to respond as a single person to put out a car fire."

A lack of proper training is also an issue, said Seth.

"Training is probably the single most important thing for our volunteers that are responding to incidents. The training program needs to be developed so we're adhering to specific standards so that every member of the department is speaking the same language."

He said some volunteers who've been with the service for two years have still not been properly trained on how to put out an actual fire and at the same time, 30-year veterans are putting them out improperly.

Seth said the department needs to develop a more comprehensive training program. But it costs money to do that. The first year of a firefighter's train­ing costs $9,000, which he says is a lot of money if the new firefighter doesn't stay. "Recruitment and retention has always been difficult," he said. "If we're going to be investing $9,000 for the first year and they disappear, then we're just wasting money."

The committee said it will take a closer look at the issue at council's Committee of the Whole in January. 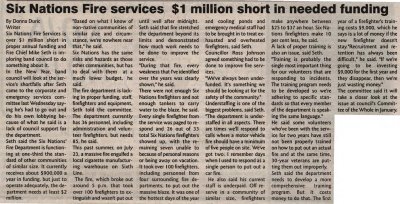