But Turtle Island News has learned Six Nations may actually be the guinea pig community for the new company's unit that doesn't have ministry of environment approval in Ontario, or Nova Scotia.

The band has hired Kearns International Ltd. of Nova Scotia to complete the job.

The company has only one of its units up and running.

It has installed its test unit on its own property in northern Sydney, Nova Scotia.

Elected council is also suing the original contractor for the $5 million the band council lost in that project.

Elected Chief Bill Montour said the band council suffered a "scam" at the hands of EnEco System of B.C.

After passing a motion in 2009 to spend $5 million in community Rama funds on a state of the art incinerator plant, the deal with EnEco went sour due to a lack of due diligence on band council's side and a company on the verge of bankruptcy on the other.

The two are now embroiled in a lawsuit for lost Six Nations funds while the community is without a waste processing facility and trash continues to pile on top of a three foot water table at Six Nations dump.

Kearns International Ltd. was contracted to supply Six Nations with a patented Kearns Waste Disintegration System for an initial $480,000.

The money is coming from the $1.2 million left over from the EnEco scam according to Chief Montour and has already been paid.

The almost half a million dollars is for the first phase of a two phase project, says the press release issued Tuesday.

There is no estimate on how much the total project will cost.

It will include a waste audit to identify what a permanent system of Six Nations would need.

In addition to the waste audit, the Six Nations dumpsite will be equipped with a temporary disintegration system that can handle a reported 20 tons of waste per day while specifications for a permanent system are worked out.

Kearns said the machine will take about 150 days to arrive on Six Nations but "will start looking for garbage" after 10. He said it is built in modules and constructed on the scene. Six Nations operators will be trained on how to use the system said Kearns.

Elected Chief Montour said that Kearns would bring in an existing unit to use while the waste auditing takes place. "We'll start processing garbage to get rid of the mess we got now," he said. Montour is looking at January 22, 2013 as the arrival date.

After phase I, when the audit and designs of a permanent facility are done elected council and Kearns will complete negotiations for a final agreement.

John Kearns, owner of Kearns International Ltd., says no estimates on the permanent system are available yet. "The waste insight audit helps me to ascertain how much equipment they need and where it will go," he said.

Kearns said his disintegrator machine has been "awarded recognition for the world's only zero carbon footprint (system) because it has total combustion."

The concept is similar to the incinerator EnEco tried to sell to Six Nations in 2009 that went bust.

Kearns says the machine does not require any fuel input because it is "autothermic." "We turn the water in the garbage into fuel... hydrogen and oxygen and that is used to fuel the fire."

The Kearns International Ltd. website describes a process where garbage enters on one end and comes out the other as ash.

Kearns said that the ash, because of the high heat, merges with a lot of the recyclable materials. He said it can be used for "below grade insulation, parking lots, road beds, and makes an ideal artificial reef to encourage the propagation of fish habitats."

"I think they'll (Six Nations) be satisfied with our technology when compared to other technology."

Elected Chief Montour said he feels good about the upcoming deals with Kearns International Ltd. He called John Kearns down to earth and task oriented. "He's a real inventor."

Montour says when the system is up and running there should be "no more need for landfill." 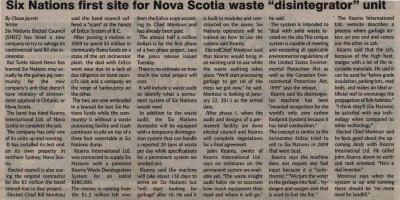