She even suggested a lawsuit or human rights complaint similar to the one that renowned child rights activist Cindy Blackstock pursued - and won - with regard to indigenous child welfare might be in order.

She received a wide round applause from AFN chiefs and delegates for her statements.

INAC officials sat silently while she aired her concerns.

She told the huge gathering that one Six Nations school doesn't even have a building to call its own.

"We have a full immersion school in our community called Kawenni:io," she said. "They've done an assessment on their students and their students are getting $4,000 per student."

That's less than half of what students across the country get off-reserve: almost $12,000 a year per student.

"They have no school," Miller said. "They have to go to school in an arena. They've been working with INAC to try and get a new school and get more funding. And even though they (INAC) constantly talk about language and culture and how important it is when they get up and make their little speeches they're not doing a whole lot to help with Kawenni:io to help them get funding to keep their kids going to school."

Kawenni:io/Gaweni:yo is a private school that teaches students entirely in Cayuga or Mohawk from kindergarten to Grade 12.

They've been seeking a home since the school was founded in the 1980s. They are currently housed in the upper floors of the Iroquois Lacrosse Arena.

In 2012, band council agreed to designate land behind Six Nations Polytechnic for the construction of a new school, but Kawenni:io/Gaweni:yo has yet to come up with the estimated $12 million for a new school.

"It's a full immersion school from kindergarten to grade 12 and they're doing wonderful things in our community but they don't have any money," said Miller. "They don't see any future if they're (INAC) going to be talking about language and culture all the time they need to put their words into action and start helping all of these language and culture programs."

"I don't anticipate Six Nations is going to get a lot of money from this whole new bundle of money," said Miller.

"That sounds like a lot of money but when you divide by over 600 First Nations, it's a pittance," she said. "Maybe that's just me. I've been around too long and I don't really trust INAC."

The community has talked about taking over education control from INAC for over a decade but Miller said without the right amount of funding, that won't be happening any time soon.

"Right now, Six Nations has no intention of taking over education," Miller said. "Right now, we get more money than band-operated schools and we're under INAC. With that said, why would we take it over?" 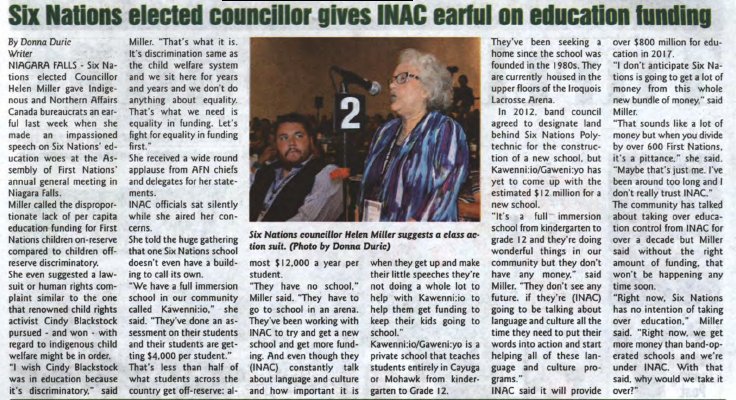