Six Nations will finally be getting a new water treatment plant. It's been years in the making and Elected Chief Bill Montour couldn't thank the funding partners enough.

Last Friday on Pauline Johnson Road the dream of a new water treatment centre came to fruition as the Elected Chief broke the ground where the facility is scheduled to go.

At the ceremony Montour spoke about just how much this plant was needed.

"In today's world we seem to forget the importance of the value of water in everyday lives," said Montour. "This plant will give Six Nations people an adequate source of safe water."

The current plant was built in 1987 and served 9,000. Over the last two decades the population has grown and put stress on the out of date plant. It runs 24 hours a day, seven days a week and is at full capacity.

Montour said that he expects the new plant will be up and running by late 2011 and will have a capacity three times larger than the current one.

Montour said that the plant will also allow the community to grow.

"The water plant represents an unleashing of Six Nations ability to provide housing, commercial development and institutional de­velopment that were, for the past 10 years, stymied by a lack of po­table water," said Montour. "Our new plant is sized to eventually provide water to the entire Six Nations community."

Representatives of the Elected Council, Indian and Northern Affairs, GREAT, First Nations Engineering and the Federal Riding in Brant all attended the ground breaking ceremony at the site of the new water treatment plant last Friday. 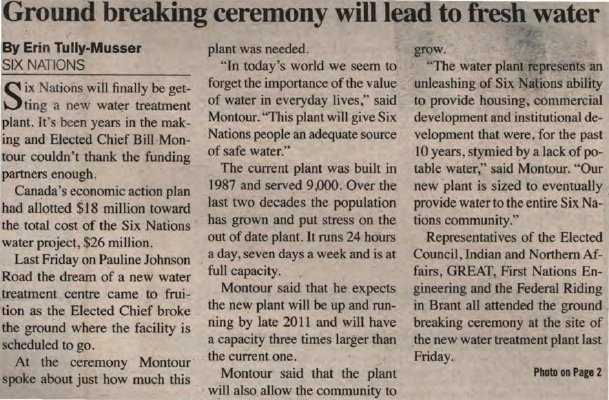