SIX NATIONS - April 12th marked the first official meeting of the restructured Six Nations Education Board (SNEB) and although not all seats were filled, a few new faces joined those from the preceding Board who will be carrying on.

As things now stand, the board representatives are: Kathy Montour for Emily C. General Elementary School, Marion Martin for Jamieson Elementary, Brian Doolittle and Peter Hill for secondary school level, Carol Bomberry for J.C. Hill Elementary, Keith Jamieson and Amos Keye for post-secondary level, and Lana Martin who will be sitting in for Gina VanEvery representing School A until VanEvery is able to take the seat.

I.L. Thomas school nor Cayuga Immersion have named a rep and Mohawk Immersion is still in the process of deciding a permanent representative.

The first item to be laid on the new board's table was that of choosing a new chairperson.

Peter Hill was suggested but the decision was stayed until all SNEB members were in attendance.

The notion of alternates for board members was examined as per whether there are accommodations for such and the associated pros and cons.

The need to recognize alternates stems from the reality that the community does not trust that the board is acting on behalf of the community, said present chairperson A. Michelle Hill adding that direct representation to the board was to cut this distrust and that as time goes by and trust is built, the number of representatives to the board may decrease.

It was pointed out by Claudine VanEvery-Albert, who was formally introduced as the Education Coordinator, that community members can come and voice opinions but designated board members make the decisions.

VanEvery-Albert then guided board members through the board's own version of the red book, a handbook which outlines the basic rules and regulations under which the board members will be working.

She noted that through the course of her job she will be identifying problem areas within the handbook and suggesting possible avenues of redress but revision, she said, will be the board's call.

One possible area of revision is the model upon which the SNEB's policies are based, the Carver Model, however, such decision is not to be made until after the board undergoes a workshop on the model.

Undergoing its own sort of revision is the model of what a home and school council is to be as the province takes on the suggestion of the Royal Commission of Learning as per a greater role and responsibility of parents to be played at the school level through School Council bodies.

As various questions have been coming in regarding school councils, what they are and how they work, VanEvery-Albert proposed to the board that the roles and responsibilities of school councils be set down so all are, as she put it, "singing from the same song book."

In that the suggestion to implement school councils is a provincial one that, in being such, does not apply on Six Nations, P. Hill stated that he wonders why SNEB, which has other things to discuss like the taking over of education, is getting into school operations.

According to statements made by P. Hill, the outline of school councils as per the handout received by board members presented a form of school councils radically different than the present home and schools which, in his view, are primarily fund raising bodies.

What was so different was the various strains of autonomy made available to each school based on the information provided; a notion which led to the question of how much responsibility is to be handed to the individual schools under Site Base Management (SBM), a possibility being examined by SNEB, and as a degree of SBM is already present under DIA how will the schools take to an infringement on that.

According to what VanEvery-Albert has been hearing from the schools they want program/policy continuity from school to school as presently there are "gaps".

It was suggested that the schools do their own research on the different models of SBM.

In reference to secondary level of education, Doolittle noted that the Tuition Agreement with Haldimand has been presented, ratified and passed but the main agreement made no reference to Immersion.

Ron Thomas, who has been following the issue of grade 9 Immersion program as parent, suggested that somewhere in the secondary school agenda mention be made of establishing a high school on Six Nations.

This suggestion was taken up by M. Hill who directed the secondary committee to look into the pros and cons of a high school on Six Nations and that someone from that committee be appointed to the Six Nations Community Plan to address the non-recognition of education and the need for an on-reserve high school. 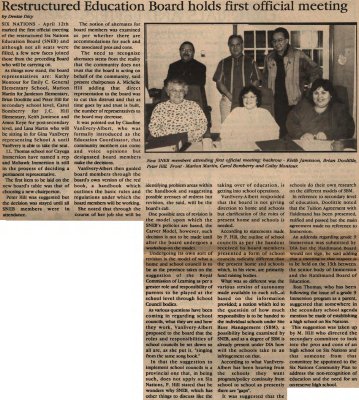