The Great Law Recital held two weeks ago at Six Nations raised almost double the amount of money it needed to hold the event.

Organizer Gloria Thomas told the Haudenosaunee Confederacy Chiefs Council Saturday the organizing committee had estimated the cost for the week long event at $90,000.

The committee managed to raise $90,794 in donations and from fund raisers

In a surprise move she told council how the committee decided the left over funds would be spent.

She said the committee decided to return $17,000 to the HCCC, and return the $7,042 the Six Nations Elected Band Council donated.

She said in addition $5,000 was given to the next Great Law Recital, expected to be held in Tonawanda next year.

She said each of the longhouses will be given $300 and $1,200 is going to the Seneca Longhouse.

Mohawk Chief Allen MacNaughton thanked the committee for their hard work, but said "I don't think it was the committee's responsibility to spend what ever was left over

"I think you end up and you make a complete financial report to this council and this council will decide how to proceed. You can make recommendations,but it is up to council to approve it." 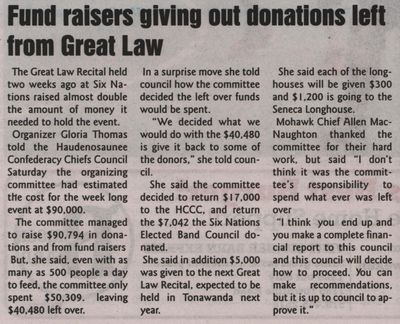