Creators
R. T., Lithographer
Charles Bird King (1785-1862)
, Artist
Media Type
Image
Object
Item Type
Lithographs
Description
Portrait of Ahyouwaighs (or John Brant, 1794-1832) who was the son of Thayendanegea (Joseph Brant, 1742/43-1807). In the War of 1812, Brant and John Norton led native warriors to stop an American attack at the Battle of Queenston Heights in October 1812. He was made a lieutenant in the Indian Department and was involved in several battles throughout the war. In 1828, he was appointed resident superintendent for the Six Nations of the Grand River. In 1830, he was elected to the Legislative Assembly of Upper Canada for Haldimand; in 1831, his election was appealed and John Warren was declared elected. He was the first Indian to sit in Upper Canada's parliament as a lawmaker.
Inscriptions
Ahyouwaighs, Chief of the Six Nations 1838
Date of Original
1838
Dimensions
Width: 15 in
Height: 24 in 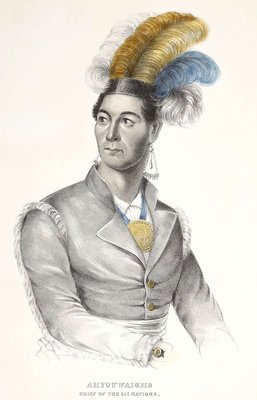