Mystery Question
Can you help us to identify any of the men in this photograph?
[Please answer by clicking on the Comments tab]
Creator
Ruddy, Marjorie Georgina, 1908-1980, Photographer
Media Type
Image
Item Type
Photographs
Description
A black and white photograph of unidentified members of the Ontario Regiment (RCAC) gathered for a reunion. The man sitting in a chair with long socks and his legs crossed is Lieutenant Colonel Edgar Frank ("Ted") Bastedo.
Notes
During the Second World War Lt. Col. E.F. Bastedo was a member of the 12th Manitoba Dragoons. The crest on his jacket in this photo is the crest of the Dragoons. Following the end of the Second World War E.F. Bastedo became Commanding Officer (Militia) for the Ontario Regiment from 1948-1951.

According to Canada's National Defence website, the Ontario Regiment (RCAC) is an Armoured Reconnaissance unit in the Reserve Force that has a history dating back as far as 1827. The Regiment has seen action in the Fenian Raids of 1866, The Great War, and World War II.

The Ontario Regiment is headquartered at downtown Oshawa, Ontario at the Colonel RS McLaughlin Armoury and has training and maintenance facilities at The Oshawa Municipal Airport. 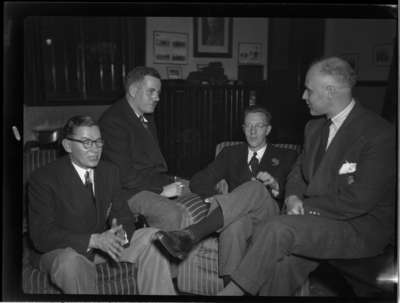