Creator
Alexander McPherson, Author
Media Type
Text
Object
Item Type
Correspondence
Description
Letter written by Alexander McPherson from a plantation in Berbice, British Guiana to his mother in Tain, Scotland.
Notes
Content warning: Racism, Slavery, and Colonialism
The Alexander McPherson letters contain discussion of slavery and managing a plantation and may contain violent descriptions. Some of this information may be difficult to absorb. These ideologies are not condoned by Archives at Whitby Public Library, but the Archives has preserved such records in the hopes that, by encountering them, people will begin to think critically about and challenge historical and current racism.

McPherson married Fanny Moore at Whitby in November 1837 and together they had eight children. While in Whitby, McPherson was made Lieutenant-Colonel of the 1st Battalion of the Ontario Militia and served as Councillor for the North Ward in 1858/59. He held the position of Post Master until his death in 1861. He is buried in Union Cemetery, Oshawa.
Date of Original
1 September 1834
Date Of Event
1834
Personal Name(s)
McPherson
Local identifier
F27_01_02_003
Collection
F27 Alexander McPherson fonds
Copyright Statement
Public domain: Copyright has expired according to Canadian copyright law. No restrictions on use.
Contact
Whitby Public Library
Email:archives@whitbylibrary.ca
Website:
https://www.whitbylibrary.ca/archives
Agency street/mail address: 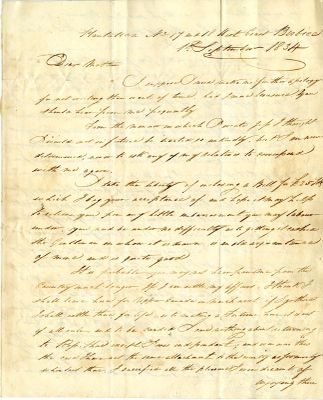