Creator
Unknown, Photographer
Media Type
Image
Item Type
Photographs
Description
Should anyone ask who Clive was, we are Eonis and Mary Vorvis of Vancouver, B.C., and we would like to say a few words about our very good friend the late Clive "Sam" Parsons of Whitby, Ontario. It was fairly recently we learned that Clive had passed away some time ago and were saddened to hear about it. We have a treasure trove of memories involving Clive and would like to share some of them below with anyone who may be interested.

The attached photo is of a sunburned Clive on the left together with long-time friend Eonis on the right and wife Mary in the middle. It was taken by Eonis' sister Marguerite Vorvis on a sunny day at Easter time around 2000 when Clive met with us at Marguerite's home in Whitby and we all sat outside on the patio in Marg's backyard for much longer than was wise to do so. Every time my wife Mary and I went to Whitby to visit my parents we always made a point of getting together with Clive as well. We were always able to pick up our banter with Clive precisely where each chapter ended on our previous visits with him. Our trips to Whitby ceased after my parents passed away but our fond memories of both them and of Clive live on.

Clive was an east-ender in Whitby, having grown up on what was then and may still be known as Ross Hill. He attended Dundas Street Public School if it still exists, but escaped attending Whitby High School as it then was except for a hasty in and out episode (as he enjoyed telling it) lasting only twenty minutes or so. He opted instead to pursue a construction career. So far as I am aware, his main contribution in following that career locally was to help build a new improved sewage treatment plant near Port Whitby. A project that was followed by constructing a similar plant with Clive's involvement in Uxbridge, Ontario. Suffice to say that Clive could have made a very good civil engineer. He certainly had the brains to be one.

Clive was a very handsome young man blessed with much patience and easiness in outlook. We understand that in the end Clive married well and was well looked after in later years when past exposure to unhealthy construction materials and demolishment debris finally got the better of him. Masks would hardly have been worn in such work back then. In any event, it is with a heavy heart that we belatedly bid farewell to Clive and hope to see him again sometime in the great beyond if one in spirit exists. Only time can answer that unknown. 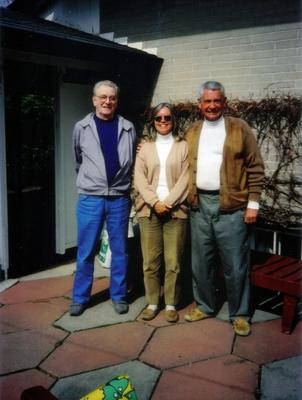