Unknown
, Photographer
Media Type
Image
Item Type
Photographs
Description
My name is Eonis Vorvis and I was an employee of Dowty Canada in Ajax from 1952 until 1957, first as an apprentice in the machine shop at the South plant then as a draughtsman in the engineering department at the North plant working on drawing modifications and eventually on new design projects. In those days a Mr. Hunt was in charge of the overall activities of Dowty Canada from his position with Dowty UK and a Mr. Hamer was the same in Ajax. A Mr. McAffery headed the engineering department, a Mr. Stratford was the undercarriage design expert, a Mr. Erindowski (phonetic spelling) was the materials strength analyst, and a Mr. Watkins was the chief draughtsman and my superior. The supervisor of floor operations at the North plant (machine shop, fitting shop and inspection) was a Mr. Parkinson as I recall.

It was Mr. McAffery who, along with a referral from Mr. Hamer, was instrumental in arranging an interview for me with the registrar at Queens University, a Ms. Royce, which led to my acceptance there as a mature student in the Applied Science program. But acceptance wasn't easy because I hadn't completed Grade 13 at Whitby High School due to a failure in Chemistry along with not having completed either Latin or French. The latter failing of which my mother chided me soundly for (no pun intended) since she was from a French background. In any event, I mended the lack of Chemistry in a night course at the Oshawa High School and Ms. Royce kindly waived the requirement for a second language. So off I went to Queens and in four years plus one Spring supplemental exam had a B.Sc. (Mech.Eng.) degree in hand. But by then Mr. Diefenbaker had cancelled the Avro Arrow project so it happened that Dowty had no job for me to return to. That being the case, I took up employment with the Plastics Department of Du Pont of Canada at their Research Centre in Kingston Ontario, applying my design experience to developing applications for their new line of structurally superior polyethylene injection molding materials.

I shall always be grateful to Messrs. Hamer and McAffery for their interest in me. Without them I might still have been an apprentice in a machine shop somewhere. In the end, one the most challenging set of drawings I have ever done was with the 37-1/2 degree twisting mechanism on the Avro Arrow main undercarriage which, along with a shortening mechanism that was detailed by a draughtsman on the drawing board next to me, orientated the Arrow's main undercarriage in such a way that upon retraction it would fit snugly into the thin delta wing of the aircraft. Kudos to Mr. Stratford who was the undercarriage design expert on this project. However, an outstanding product destined to have no future other than to wind up as a museum piece. Also, kudos to Mr. Hamer and persons unknown who are said to have "liberated" the one known Avro Arrow main undercarriage unit that escaped Mr. Diefenbaker's attempt to literally scrap all traces that the Avro Arrow had ever existed. Even to to the extent of destroying all the drawings it is said. (All but one that I am personally aware of that is.) The root of Mr. Diefenbaker's wrath was said to have been his dislike of the expensive high flying lifestyle of Avro's CEO, Mr. Crawford Gordon Jr., together with the apparent fact that Avro had a cost plus contract with the Canadian Government. A witch's brew so far as the straight-laced Mr. Diefenbaker was concerned it seems.

[more details]
Copyright Statement
This item is protected by the Canadian Copyright Act and is intended for one-time use only. Uses other than research or private study require the permission of the rightsholder(s). It is your responsibility for obtaining these permissions.
Contact
Whitby Public Library
Email:archives@whitbylibrary.ca
Website:
http://www.whitbylibrary.ca/archives
Agency street/mail address: 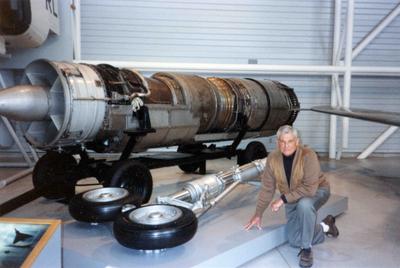