Creator
Unknown, Photographer
Media Type
Image
Item Type
Prints
Description
A black and white photograph of Mr. and Mrs. Ross Johnston. Mrs. Johnston is reading to Mr. Johnston in this photo. This photo was printed in an issue of the Saturday Globe.
Notes
Ross Johnston was born near Gretna Green in Dumfrieshire, Scotland on August 3, 1827. His parents died when he was a child and he was brought up and raised by his grandfather. The family moved to the Eastern Townships of Quebec in 1841 and to Whitby in 1848. Mr. Johnston became a school teacher in the log school house at Port Whitby from 1852 to 1857 and was the first teacher in the brick school house at the port. For a few years he was a storekeeper and legal clerk for Whitby lawyers and for the remainder of his life he was employed in the Ontario county Land Registry Office. Mr. Johnston was a member of the Whitby Branch of the Upper Canada Bible Society for 60 years and a superintendent of a number of Sunday Schools. He was a noted poet in Whitby and his work was printed in the local newspapers. He wrote the New Year's address for the Whitby Chronicle and in 1883-1884 he wrote a series of articles about local communities and the history of Whitby Churches under the name of "Traveler" in the Chronicle. he was also the bard of the Pickering and Whitby St. Andrew's Society. Mr. Johnston died at Whitby on June 3, 1911. Mrs. Johnston (Esther Ann Hawley) his second wife was born in 1842 and died at Toronto on December 31, 1921. Both Ross and Ester are buried at Union Cemetery, Oshawa.
Date of Original
c.1900
Dimensions
Width: 6 cm
Height: 6 cm 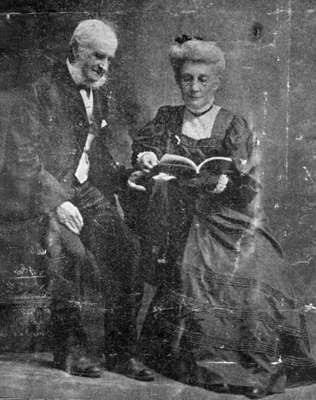