Creator
R.A. Hutcheson, Photographer
Media Type
Image
Item Type
Photographs
Description
Dr. Edgar Evans, feeding a chipmunk, Huntsville, Ontario, 1951,. Wife Hilda in background.
Notes
Edgar George Evans was born May 15, 1882 in the Township of Georgina, York Co., to George Evans Jr., a farmer and Priscilla Prosser. After graduating from the University of Toronto Medical College he took post-graduate work in Buffalo, New York and practised as a ship's surgeon on the Dakar running from Liverpool to South Africa. He later operated three hospitals during the building of the Canadian National Railway at Parry Sound, Bying Inlet and Sudbury, going from one place to another by dog sleigh. He came to Huntsville in 1916 as an assistant to Dr. J.D. MacDonald, who was the medical officer of the 122nd Battalion. His team of racing horses was well known in the Muskoka district and it was not unusual for him to drive a hundred miles a day in all kinds of weather, bundled in his big beaver coat, cap and gloves. He never failed to respond to calls from expectant mothers in the night or bitter cold in such places as Port Cunnington, Fox Point and Dwight. He purchased the old Dominion Bank building, at 34 Main St.,in the Bettes Block, in 1925, living in the apartment above the offices below. Failing health and a heart condition caused him to curtail his practice and then retire. He managed the Huntsville baseball teams in the 1920s, and was keenly interested in hockey and lacross, a member of Unity Lodge, the Rameses Shrine and the Odd Fellows.In 1926 he married Hilda May Peacock of Huntsville and had one daughter Sally Mae. In his book, Fifty Years in Huntsville, 1934-1984, Jack Laycock describes the following event "...Miss Stobie suffered a stroke. As we were snowed in, Dr. Evans came by car to Turnbull's and Mr. Turnbull brought him the rest of the way with horses and sleigh, to visit the ailing woman. He recommended hospital care and while that was being arranged the services of a young nurse, Jessie Rumball from Huntsville, were acquired. After a day or so, Miss Stobie and Jessie were loaded on Mr. Turnbull's sleigh and taken to town where Miss Stobie went by train to a hospital." This was in 1936.
He died in 1952 and is buried at the Hutcheson Memorial Cemetery in Huntsville along with his wife.
Date of Original
1951
Date Of Event
1951
Subject(s)
Physicians
Portraits
Local identifier
464
Collection
R.A. Hutcheson Estate
Geographic Coverage
Donor
Janet Fisher
Copyright Statement
Public domain: Copyright has expired according to Canadian law. No restrictions on use.
Contact:
Huntsville Public Library
Cortney.LeGros@huntsvillelibrary.ca 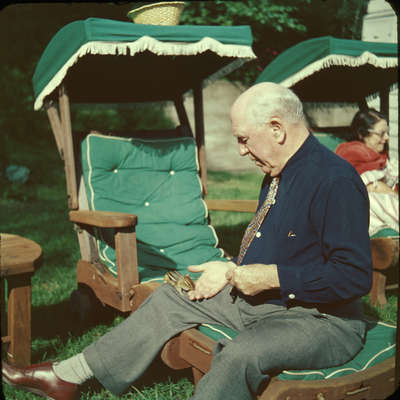