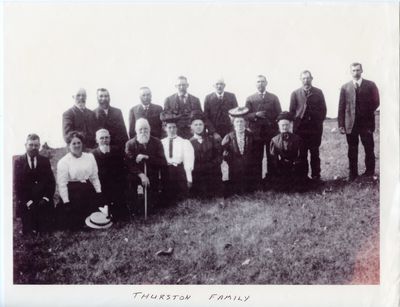 page 1 - Thurston Family Details
"A great percentage of the population here were under the name 'Thurston'. The Voters List of 1966 shows 40 by that name. It is recorded that in 1835 the first person of this name arrived from England... It is also believed they brought some red and white cattle, later called herefords, with them."
-- Pioneer Gleanings from Verulam 1867-1967 by T.H. Martin

"Jonas and Thomas Thurston, sons of John Thurston and Elizabeth Smith, Norfolk, England came to Canada in 1830. Four other brothers had settled in Canada previously. Jonas was twenty-two years of age when he came to this country. They farmed at Cobourg, Ontario for a few years and then came to the Dunsford area.
The two brothers bought unsurveyed Crown Land on what became Lot 2, Concession 4 Verulam in 1841... They cleared the land and built log homes."
- Ezra C. Thurston, 1967, from The Tweedsmuir History by Kawartha Valley Women's Institute.
Main Menu → Previous Page → Next Page
Powered by / Alimenté par