Many famous Japanese Canadians today directly experienced internment or are descended from parents and grandparents who did. David Suzuki, perhaps one of the greatest Canadians of all time, experienced internment in the Slocan Valley of British Columbia when he was six years old, and was forced to move to Ontario with his family after World War II ended. He grew up in Leamington and London, Ontario, due to the racism of the Canadian government.

Internment came in different forms: agricultural labour, road work, construction. Women and children lived and worked side-by-side with men in many areas of Canada, but in Ontario it was most commonly young Japanese men brought alone to perform hard manual labour.

Internment also happened in stages: the Canadian government first limited the ability of Japanese people to go out at night, with a curfew; they then began restricting where they could shop; then they began confiscating businesses, cars, and property. Able-bodied men were sent away first, with whole families displaced later. While people were in transit they were only allowed to carry what they could manage on their own; sometimes police and government officials stole possessions.

A few years ago, the national library and archives in Canada made public hundreds of letters that were written by internees protesting their treatment:

In July 1944, Yoneyama received word that his life’s work had been undone. His property had been sold for less than half of the farm’s annual income, he wrote. “I realize that we are the victims of a war emergency and as such are willing to undergo… hardship… to help safeguard the shores of our homeland,” Yoneyama wrote in his letter to the Government of Canada.
Yet he never imagined that he would lose everything. “I came to Canada in 1907,” he wrote, “and was allowed the privilege of Canadian Citizenship on December 22, 1914.”
“This was to me,” he continued, “the most gracious opportunity given by the country of my adoption. Through it, I realized an ambition I had desired since landing on this continent, that of being able to raise a family of Canadian sons and daughters.”
The loss of all this, Yoneyama stressed, was more than just economic. His home, he wrote, “to us meant more than just a home. It was to us, the foundation of security and freedom as Canadian citizens.”

This video, with images from the Schreiber Public Library digital collection and audio from an interview wiht internee Yon Shimizu, explains some of what internees went through: 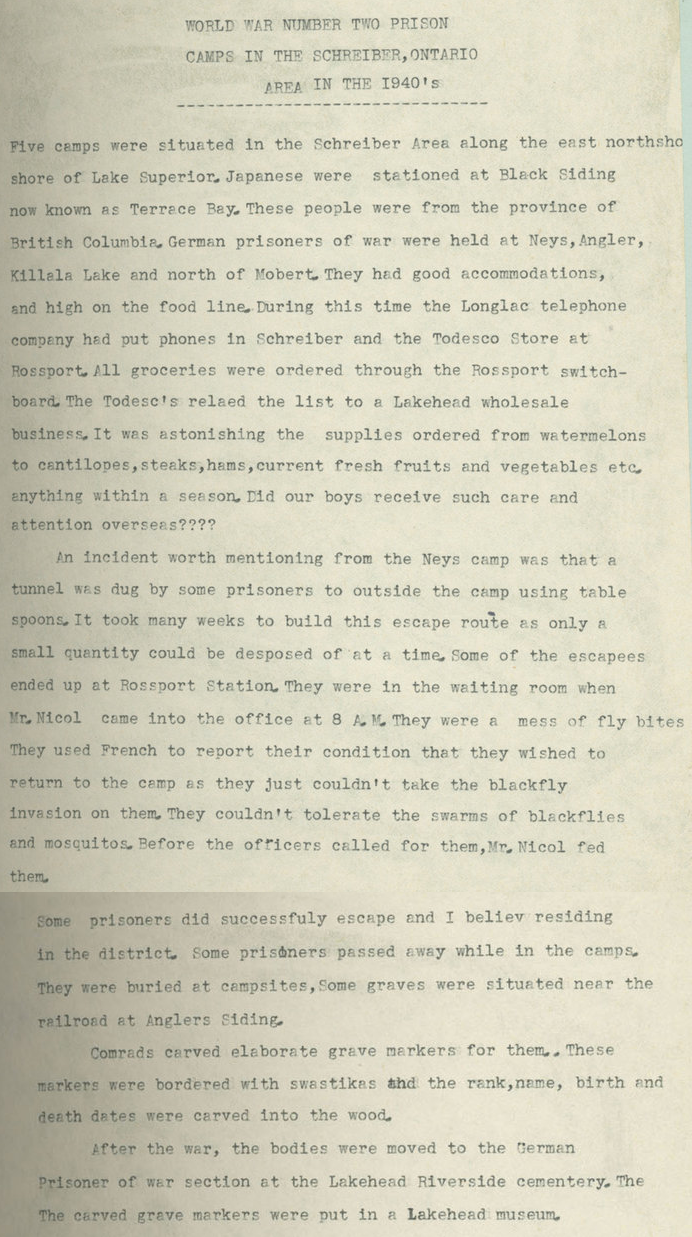 Courtesy the Schreiber Public Library. [Learn More]
A typewritten history of the Schreiber area from the Women's Institute includes a short entry about the nearby internment camps. German prisoners of war are mentioned in the same breath at Japanese internees.
Back to Exhibits → Previous → Next
Powered by / Alimenté par